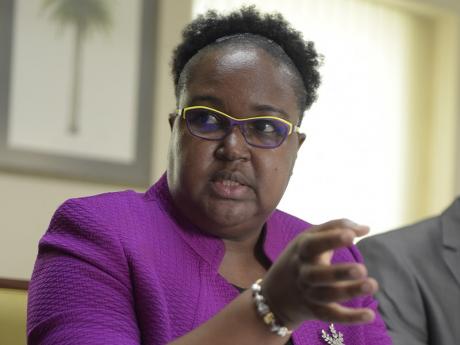 McLean is at the centre of a damning report on fiduciary failings surrounding payments to the Joint Committee on Tertiary Education. - File photo.

Dr Grace McLean, acting permanent secretary in the Education Ministry, has been sent on leave.

McLean is at the centre of a damning report on fiduciary failings surrounding the payment of $124 million to the Joint Committee on Tertiary Education.

She arrived for work about 5:30 a.m. today and left some time after.

The revelation about the loss was made by Auditor General Pamela Monroe Ellis in a report tabled in Parliament yesterday.

Monroe Ellis has suggested that Education Minister Fayval Williams call in the police or a designated anti-corruption body to investigate the matter.

At the same time, the auditor general has recommended that the Finance Ministry institute surcharge action against two senior officers, including McLean, on the basis that they failed in their fiduciary duty.

The Auditor-General said the senior technocrats failed to ensure that Government funds were appropriated in keeping with the requisite law and established guidelines and that arrangements were put in place to safeguard government resources.

Monroe Ellis reported that McLean permitted the transfer of $11 million to the Dr Cecil Cornwall-chaired JCTE after the body became a private entity.

The JCTE was the entity that shocked officials last year after it became private in February 2019 blocking the auditor general's investigation into use of government funds connected to the Caribbean Maritime University scandal.

In July 2020, McLean told PAC members that she first became aware that the JCTE had become a private entity when the auditor general requested information from the entity and the documents could not be provided.

McLean said she wrote letters to no avail, asking for the documents to be submitted to the auditor general.

The acting permanent secretary said after discovering that the JCTE had become a private entity, she curtailed the arrangement that was in place with the ministry.

McLean said she wrote to the chairman on June 8, 2020, stating that the ministry could no longer continue the previous arrangement now that it had changed its status to a private entity.

In the special audit report tabled in Parliament this afternoon, Monroe Ellis stated that the arguments of Cornwall, the Permanent Secretary and McLean were unacceptable.

She charged that Cornwall did not have the authority to privatise a Government entity.

“The Chairman's private entity is separate and apart from the JCTE, special advisory committee established by the Minister of Education”.

“It should be noted that the Acting Permanent Secretary permitted the transfer of $11 million to JCTE after her failed attempt to obtain the accounting records from the chairman; despite knowing that the chairman laid claims that he is the owner of the Company and refused to comply with the Auditor General's request for information.”

Monroe Ellis said that her department submitted a draft report on the JCTE to the Ministry of Education on June 22, 2021.

The auditor general said that McLean did not provide any additional supporting documentation as part of that response.

However, McLean submitted additional supporting documents on October 6, 2021, after being provided with a copy of the report that was scheduled to be sent to Parliament.

The documents submitted included payment vouchers prepared by the ministry supported by invoices prepared by JCTE.

“I advised the acting permanent secretary that the information is insufficient as the documents provided do not represent suppliers' invoices; which are required to determine how the funds were utilised,” said Monroe Ellis.