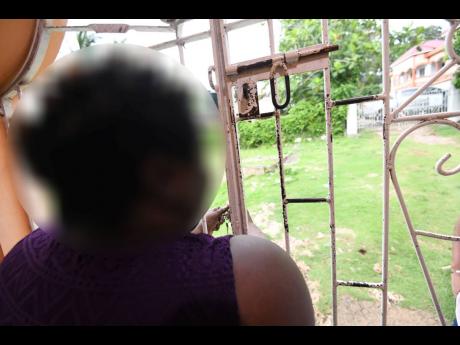 Rudolph Brown
Alicia, a resident of Price Lane in Ewarton, St Catherine, shares her ordeal after being robbed at gunpoint at her home.

A series of armed robberies in a Ewarton community in St Catherine has left one resident fearing for her life and that of her daughter’s.

The Price Lane resident recalled the horrifying evening when four masked perpetrators invaded what she used to call home, a presumed safe haven for her family.

Looking down the barrel of the invaders’ guns has created a feeling of uneasiness, which has resulted in her eyeing other places to relocate. This, she said, may help heal her daughter’s trauma.

“This is not a home anymore,” she told The Gleaner on Sunday afternoon.

On Monday, September 27, at approximately 7:23 p.m., the victim and her daughter had just driven into their yard after returning home from a quick stop down the road. Her daughter, who returned to the gate to close it after driving in, was pounced on by men who rushed onto their property with the intention to steal the vehicle.

On the occasion of the incident, the two had left the gate open as they had done many times before when travelling short distances within the community. According to the mother, this trip was only seven minutes down the road, but this time the robbers awaited their return.

Alicia described how fearful she felt being a woman alone at home, as her husband was at work, especially with one of the shooters holding a gun to her daughter’s face.

The vehicle consisted of various documents pertaining to her work, her daughter’s studies, identification cards and monies belonging to her clients.

That the incident has perturbed her daughter, who is preparing for Caribbean Secondary Education Certificate (CSEC) exams, is of great concern to her. This is especially so as since the incident, neither of them has felt safe. “When it touch evening and it start to get dark, you start to relive the entire incident again; it’s not a nice feeling,” said the mother, explaining that her daughter has been showing signs of post-traumatic stress disorder, such as heightened levels of anxiety.

Breaking down in tears, she is now concerned for her daughter’s mental health as she grapples with online studies. “She’s not sleeping in the night. Things just happened so fast. Right now she is traumatised,” she said.

Having not returned to work since the incident, the sales adviser is currently apprehensive to leave her daughter alone at home for online classes.

“I wouldn’t imagine leaving her here, because this is not safe. We considered it our home, but we can’t say the same anymore. This is nowhere that I want to be,” she added.

She is now seeking justice for her daughter’s sake and also wishes for a sense of safety in the community, which would benefit greatly from an increase in police patrols.

The incident was reported to the Ewarton Police Station, where a statement was taken from her.

This is not the first instance of robbery in the neighbourhood, according to other residents, who informed The Gleaner anonymously about an incident in which gunmen robbed an elderly woman of over $500,000 at her under-construction home on Nugent Road.

A resident of McGrath Road also shared that she exhibited anxiety after witnessing her cousin being held at gunpoint at her home. “I’ve lived here all my life and that’s something that has never happened before,” she exclaimed.

However, according to Superintendent Howard Chambers, the commanding officer for St Catherine North, there has been no other incident of this nature that has been reported to the police. He described the crime as a “one-off incident,” adding that the neighbourhood is generally relatively calm and that no criminal trend has been observed. He added that the armed robbery of the vehicle is under investigation.