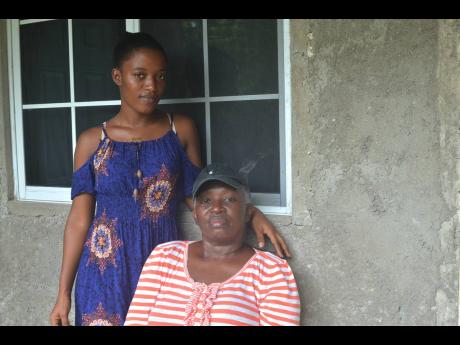 Contributed
Maxine Moulton-Drummond (seated) and her daughter, Rennecia Reid, at their home in Retrieve, St James. Moulton-Drummond, who is currently undergoing cancer treatment, had a mastectomy to remove her left breast in 2015. 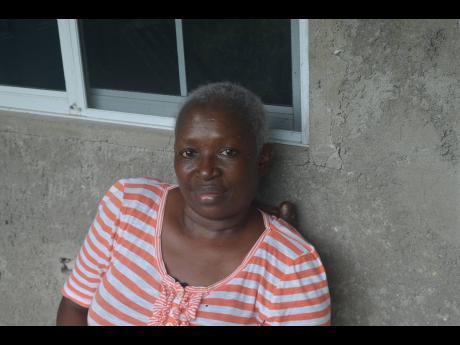 Contributed
Maxine Moulton-Drummond shows the current state of her hair, which fell out after she underwent chemotherapy treatments in 2016. She had done a mastectomy to remove her left breast in 2015, after being diagnosed with breast cancer.
1
2

Combined with her strong faith in God, Maxine Moulton-Drummond is using her 2015 experience as a breast cancer survivor to inspire and encourage others facing a similar dilemma, even as she is now undergoing fresh chemotherapy treatment for her condition.

“I always put my trust in God, and I always tell myself that this is a fight. I have to fight on and I cannot give up,” the 56-year-old told The Gleaner. “I have to trust in God for him to lead the way. Cancer might be a death sentence to some, but to me, it is just a struggle I have to go through.”

Her battle with the disease began in August 2015, when she discovered a lump near one of her breasts while working as an auxiliary staff member at the Catadupa Primary and Junior High School.

“One Saturday, I was cleaning up at the school, and I realised that I was feeling a lump on my left side. I was very curious, because I examined my breast in July and did not feel anything at that time,” said Moulton-Drummond. “I went to work the following Tuesday, and it started to irritate and pain me, so I said I would have to check this thing out. I went to the clinic, and the doctor gave me some papers to go by the hospital to do a mammogram.”

Following the mammogram, she was recommended to do an ultrasound, and then a biopsy, where a piece of the lump was removed and sent for testing. She subsequently had an operation to remove the affected breast in October that year.

“To tell you the truth, I did not really worry, and I did not want to set it on my mind, because they did not hide the diagnosis from me. I asked the doctor if I had to do a complete surgery and if they could not just take out the lump alone, and the doctor said, ‘No, it’s best to take off the whole breast,’” said Moulton-Drummond.

“The recovery period was very painful; plus, I did chemotherapy in 2016, and radiation treatment in 2017. Doing the chemo was a struggle, and I lost my hair, but I got over it,” she added.

Following that experience, Moulton-Drummond thought her fight with cancer was over. However, the battle started afresh earlier this year, beginning with shortness of breath and a positive COVID-19 diagnosis.

“The cancer returned and affected my lungs earlier this year. I found myself with shortness of breath, and I went to the doctor, who sent me to do a COVID-19 test. The test said I was positive, but I said no, because nobody else in the house had symptoms [of COVID-19] or anything like that,” said Moulton-Drummond..

“After the quarantine period was over, I went to Montego Bay again and was carrying some load, and I felt shortness of breath come on me again. It was suggested to me to go to the doctor for a referral, and the doctor told me to do an X-ray,” she said. “It was found that I was developing some fluid on my left side, and they realised the cancer had returned and attacked the lungs.”

Since April of this year, Moulton-Drummond has been on chemotherapy treatment for her disease, which has forced her to adjust her lifestyle in regards to adopting a healthier direction.

“I am on chemo again, from about the last week of April. Plus, I cannot talk too hard and lift anything too heavy,” she said. “I avoid sugary drinks and the fatty part of meat, and I eat mostly fruits and use less oil. I do exercises, such as skipping ... I use to skip sometimes, although I cannot do that much skipping again. I have to do a little walking and stretching, so I try to get up early in the morning and do a little walking.”

Despite the trials she has had to endured because of her illness, Moulton-Drummond has been able to use her experience to give hope and positive energy to other women who she knows are facing similar situation with their own health.

“God put me through the test so that I can motivate somebody else. For instance, my co-worker was going through a situation where she felt a lump in her breast and she did testing. I called her one morning and I asked her what was going on, and I said, ‘Talk to me, I have been there,’” said Moulton-Drummond. “She started to tell me about it, and I was there to encourage her and tell her it is not the end of life, and then I went with her when she went to do her chemotherapy.”

While she has been giving support and encouragement to others, Moulton-Drummond said she has benefited from the support of relatives and her church family at the Catadupa-based Showers of Blessing Apostolic Church.

“My daughter is here with me and she helps me out, and my granddaughter is here, too. They are young, but they try to help,” said Moulton-Drummond. “I also have my church members and my pastor, who have encouraged me and who have prayed for me.”

Moulton-Drummond’s daughter, Rennecia Reid, who was present when The Gleaner spoke to her, admitted that her mother’s trials have influenced her to live her own life in a healthier way.

“When my mother had her first diagnosis, I did not put it on my mind like how it is on my mind now, because I was younger then. Sometimes it puts me under stress, worrying about her and wondering if she will recover again,” said Reid.

“When I read up on the disease, it said to eat less fatty meats; so I have eased off that, and I mostly eat what she eats. I probably may not know what to go and buy to eat healthy, so whatever my mother buys, we cook and eat together,” added Reid.