Gov’t on track to deliver 70,000 housing solutions in five years 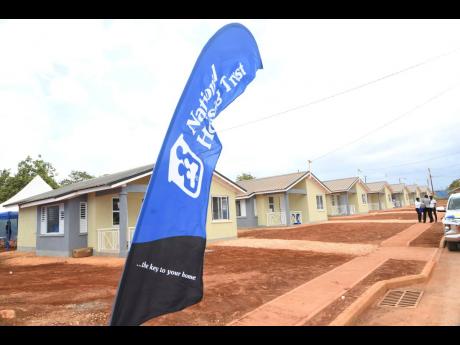 File
Some of the houses in SilverSun Estates at Innswood which have already been completed.

With the Government focused on delivering 70,000 housing solutions in five years under its private-public sector cooperation initiative, four developments in St Catherine are on course to provide more than 3,000 units.

Housing, Urban Renewal, Environment and Climate Change Minister Pearnel Charles Jr has asserted that the numbers are moving in the right direction, and said that the Government has forged a strong partnership with developers to meet the Government’s mandate.

“I can see the partnership where they themselves have taken on the responsibility of meeting the price point, making sure that the housing solutions are as affordable as possible,” the minister said during a tour of the developments in St Catherine last Friday.

SilverSun Estates at Innswood, currently being developed by West Indies Home Contractors Limited, is due to deliver 1,200 units, of which 500 have already been completed. Another 150 are expected to be handed over by January 2022.

The Orchards housing development, across from Innswood, has pledged to deliver 1,000 two-bedroom units, having already completed 269. Orchards has been the target of complaints by prospective homeowners, who have criticised developers Asco Project Consultants for lagging the completion of units.

Kemtek Development and Construction Company Limited, with 970 two- and three-bedroom units, is planning to start delivering units by Christmas. And the Roseneath development of 167 housing solutions in Old Harbour is anticipated to begin churning out units in 2022.

Prime Minister Andrew Holness had indicated at the first handover of keys to homeowners at the SilverSun development that with the price point of $10 million and $11 million under the National Housing Trust’s Guaranteed Purchase Programme, homes would be affordable to working-class Jamaicans.

But despite the developers’ efforts to adhere to the Government’s standard of water-harvesting capacity, green space, recreational amenities, grocery stores, and solar potential, Charles Jr hinted that “there is much more to be done”.

“We still see future designs and amenities that need to be upgraded and adjusted towards the Government’s objectives of sustainable development,” Charles Jr said.

The minister said that while the Government was willing to listen to developers’ concerns about bureaucracy, regulations and procedures were not without cause.

Meanwhile, chairman of the Real Estate Board, Andrew James, said that the construction sector will lead the way for Jamaica’s emergence from the COVID-19 pandemic, which has gutted favourable trends in economic growth and employment. Around 135,000 people lost their jobs at the height of the pandemic.

While the economy contracted by 5.7 per cent for the January to March quarter, construction boomed 12 per cent, data from the Planning Institute of Jamaica show.

“We want to play a role in what the developers are doing and, at the same time, we want to protect the contributors who are buying properties,” James said.