Hamilton on mission to take constituents into the 21st century 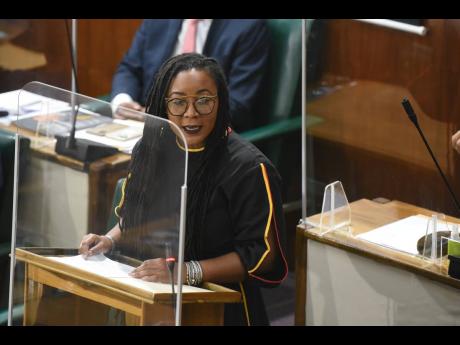 Member of Parliament for Trelawny Northern Tova Hamilton has embarked on the Herculean task of transforming her constituency from its “1890 state of decline to that of a 21st-century model constituency”.

Since winning the seat in last September’s general election, prior to which it had been held by the People’s National Party (PNP) for the last three decades, Hamilton now realises that she has inherited a “mammoth legacy of nothingness”. She described the PNP’s tenure as “31 years of tomfoolery”.

Hamilton used last last week’s contribution to the State of the Constituency Debate to tabulate the litany of woes during the “lost 31 years” of underdevelopment which had been manifested in, among other things, the lack of proper road infrastructure in more than 40 communities; inconsistent to non-existent water supply; lack of access to education: dire need of education; lack of community development; the absence of broadband service, lack of employment; and little or no youth engagement.

“With such a turbulent history and the obvious need for intervention, I have taken on the responsibility to provide visionary leadership with the greatest level of sincerity, passion and determination. It is my fervent mission to leapfrog Trelawny Northern from its 1890 state of decline to that of a 21st-century model constituency,” she told the House.

The first-time member of parliament (MP) lamented that despite the fact that Falmouth enjoyed piped water before New York City, sourced from the Martha Brae River in the parish, which now provides potable water to residents of St Ann and St James, many communities in her constituency are still without the precious commodity.

“Our advocacy has yielded positive responses from the National Water Commission, as works have been undertaken to expand their service and improve. The recent completion of phase one of the Wakefield to Bunkers Hill pipeline replacement project has improved water supply to the residents of Wakefield, Friendship and Bunkers Hill at a cost of approximately $69 million,” she disclosed.

The second phase of this project is at the design stage and is slated for completion within the next financial year, while the $200-million Dornoch and Greater Dornoch rehabilitation and upgrading project, which began in April 2021, is expected to be completed by February 2020.

“Residents of Brampton, Calabar and Samuel Prospect will, after more than 39 years, stand to benefit,” she added.

The Martha Brae River, which has the the capacity to produce 11 million gallons of water per day, now only provides a maximum of eight million gallons per day. A contract to upgrade the power supply to the facility, in order to maximise output, has been awarded and the work should be completed by January 2022.

Relief is also in sight for residents of Bounty Hall, who have been at their wit’s end with the inconsistent to non-existent water supply over the past 50 years. This is as a result of frequent damage to the pumping unit at the Bounty Hall re-lift station.

However, the MP gave the assurance that two new pumps have been approved to be installed over the next four to six months.

Hamilton explained that this is just the start of a comprehensive programme of improvement planned for Trelawny Northern, with road rehabilitation, more improvements to water supply systems, electrification of communities, expansion of housing stocks, investments in education, provision of broadband service and greater levels of agricultural productivity on the agenda.

“We’re well on our way to creating our future,” Hamilton assured her constituents.