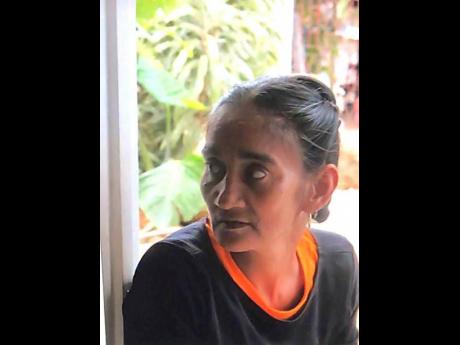 The mother of Donald Wescart, who was shot and killed during a brazen daylight gun attack at Enfield in St Mary on September 22, passed away on Monday.

Sixty-year-old Georgette Sankar, who was shot in the back during the attack, was reportedly rushed to hospital a little over a week ago after suffering a stroke. Sankar is believed to have died from complications associated with the stroke.

Family members who spoke on condition of anonymity said that she was treated and released from hospital the same day of the attack. She was said to have been recovering.

"Many people are claiming that she died as a result of injuries suffered from the shooting, but that is not true. The doctors will tell you that her passing is as a result of the stroke that she suffered," said a relative.

The St Mary native was one of seven persons who sustained gunshot wounds after two attackers entered a yard in Enfield shortly after midday and opened fire.

Three persons were pronounced dead at hospital, three treated and released, while another was admitted in a critical state.

Three Haitians deported, one left behind

One of four Haitians who coasted ashore Spring Garden in Portland on August 3 is still resident in Kingston, but his three countrymen have been deported.

The Haitian fishermen had reportedly spent more than 10 days drifting at sea.

All four pleaded guilty to the charge of illegal entry and were each fined $5,000 or 15 days in default on September 24.

The Haitians were sent home on a flight on Tuesday, but the fourth was reportedly not allowed to board the aircraft after the pilot raised security concerns.

No police or officer from the Passport, Immigration and Citizenship Agency was on board the flight.

The Haitian national who was refused entry to the flight is Similien Mickenson, 26. He will remain in Kingston until another flight is secured.

Jamaica Defence Force soldier Hopeton Chambers, 25, and his brother, Anthony Chambers, were denied bail when they appeared in the Manchester Parish Court on Wednesday.

The two are facing charges of wounding with intent and illegal possession of firearm and ammunition from a shooting incident in St Toolies.

Reports are that, at approximately 7 p.m. on Tuesday, September 28, the brothers attacked a man at a shop where he was with his family.

The police intercepted the men along the main road as they allegedly tried to escape.

One firearm was seized.

The complainant is said to still be at a medical facility in serious condition.

No motive has yet been established, the police have said.

Parish Judge John Tyme requested that the allegations be shared in camera.

The men are scheduled to reappear in the Manchester Parish Court on Friday, November 12.