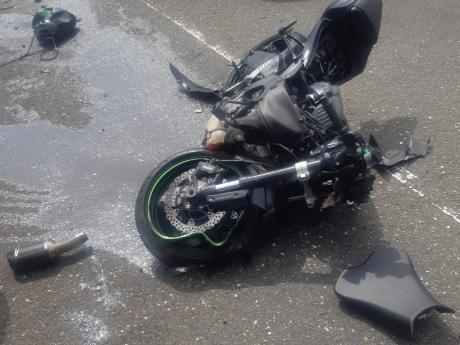 The deceased, whose identity is being withheld by the police pending further investigation, is said to be of a Trelawny address - Contributed photo.

A man has died after being injured in a crash along the Melrose Bypass in Manchester this morning.

The crash, which happened about 10:00 a.m., involved a motorbike, a motor car and a bus.

The circumstances surrounding how the crash happened are yet to be ascertained.

However, the police say information gathered so far indicated that the male motorcyclist, as well as the car, were travelling east along the road while the bus was travelling in the opposite direction.

The man was among the crash victims.

The deceased, whose identity is being withheld by the police pending further investigation, is said to be of a Trelawny address.

The conditions of the other crash victims have not yet been determined.