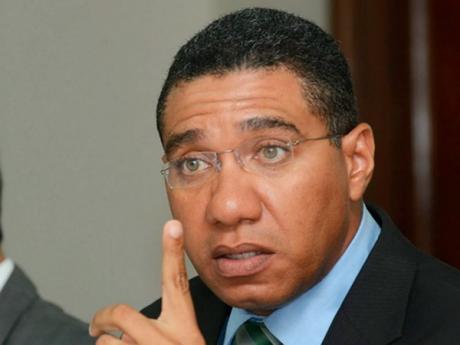 Holness: "The PNP has no interest in [the] public good. They are only interested in politics. They don't want to face a defeat in local government elections...It's transparent what they are doing. - File photo.

Prime Minister Andrew Holness is maintaining that there are no immediate plans to call an election.

Holness made the declaration while speaking this afternoon at the vaccination site at the Richmond Health Centre in St Mary.

He also criticised the People's National Party (PNP) whose General Secretary Dr Dayton Campbell has argued that Holness is using the islandwide vaccination tours as a cover-up to campaign for local government elections, which are due by February 27, 2022.

READ: Opposition wants MOU with PM pledging no elections for 2021

"The PNP has no interest in [the] public good. They are only interested in politics. They don't want to face a defeat in local government elections...It's transparent what they are doing. They are saying 'hey, don't call any election because we don't want to lose'," charged Holness.

Holness asserted that there is no benefit to announcing an election now given that this ruling Jamaica Labour Party (JLP) is firmly in Government and that the party also holds the majority of the leadership of municipal corporations.

"That is the farthest thing from my mind...What more is there to prove?" said Holness.

He charged that the PNP has proven to be a "great disappointment", making reference to PNP President Mark Golding indicating on Monday that he is not in support of mandatory vaccination.

Golding said that with no avenue for recourse in the event persons have adverse reactions to the COVID-19 vaccine, he could not support the move.

Holness expressed surprise with his stance, noting that Golding recently shared his support for vaccination.

"Only to see recently some ambivalence, if not, a retreat from the position of support. It is a sad day for Jamaica and Jamaican politics and it is just vulgar opportunism," the prime minister said.