Firefighter who pulled man from pit gets nat’l honour 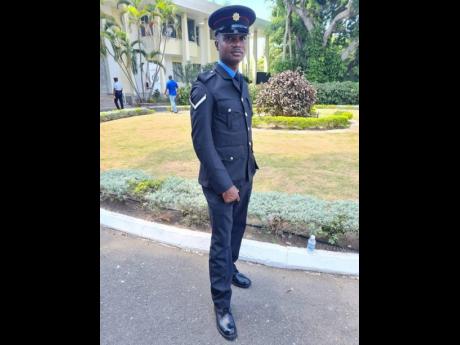 Contributed
Lance Corporal Dennis Taylor of the Jamaica Fire Brigade, who, on the morning of May 2, 2021, braved the depths of a dark pit to rescue George Smart, an elderly taxi driver who was robbed by gunmen. 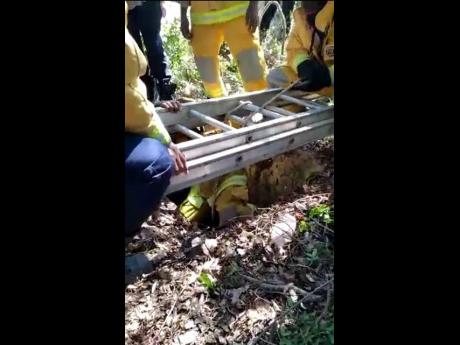 It is said that a hero is somebody who voluntarily walks into the unknown.

This aptly describes Lance Corporal Dennis Taylor who, on the morning of May 2, 2021, braved the depths of a dark pit to rescue elderly taxi driver George Smart after a frightful encounter with gunmen.

Relating the experience, Taylor said he was part of a response team dispatched from the St Catherine division of the Jamaica Fire Brigade (JFB) to help rescue the gentleman, who was robbed of his vehicle and thrown into the 55-foot-deep pit.

The mission was not unusual, as part of the job of a firefighter involves rescue and recovery. In fact, Taylor had retrieved bodies from a gorge and a pit in the past.

“On arrival at Jones Avenue in Spanish Town, we saw some police officers who directed us to a hillside where they said a man was trapped in a pit. We had to walk through hilly terrain to arrive at the area. Upon arriving, the team assessed what we had and what we needed to do to execute the rescue mission,” Taylor recalled.

He said that the team soon realised that the extension ladder was not long enough to reach the depth of the pit, and he agreed to be lowered into the dark cavern on a rope to undertake the rescue.

“I tied the rope in a harness and was lowered into the pit where I saw the gentleman way down in the depths. I secured the same harness around him and had the rest of the team pull him up. Then they lowered the rope for me to come back out,” he related.

Taylor said that the pit was not only dark but also hot, and he was amazed that the elderly gentleman was able to survive in those conditions.

“On arriving down there, he said, ‘God answers prayers’, so obviously he was praying. So, I was wondering how he managed to stay down here so long and not pass out. Putting myself in his position, I thought about not seeing my family again and just thinking about what could have possessed persons to do such a cruel act to an elderly person,” said Taylor.

Asked if he was nervous, the firefighter said that there was never any doubt in his mind about doing his job on that day, particularly because he was confident in his team members, who ensured he could safely execute the mission.

“I was just saying to myself, ‘If he could survive down there, then I should go down there successfully and help him out’, and just the thought of saving a life eradicated any fears of going down there,” he added.

For his act of bravery, Taylor will be presented with the medal of honour for gallantry at this year’s virtual National Honours and Awards Ceremony on Monday.

Taylor said that he is extremely grateful for the recognition, although he maintained that he was just doing his job.

“The pride comes when I see my family and team members’ reaction. This has placed us (the JFB) in a positive light. I’m honoured and elated to be recognised for such a noble act. I wasn’t doing it for any recognition; I was doing it to save a life. So, it’s a wonderful feeling being honoured,” he said.

Assistant Superintendent assigned to the St Catherine division of the JFB, Otis Rowe, said that Taylor “deserves this recognition because what he did in such a unique situation is truly an act of bravery. It’s a job well done”.

He said that the firefighter has shown an ability to use his initiative and make sound decisions in challenging situations.

“He’s able to make modifications based on changing situations. Lance Corporal Taylor always displays a positive attitude despite the outcome,” he noted.

“This is something that firefighters do readily and almost on an everyday basis. Of course, this one had particular elements to it. It is said that the firefighter performs an act of bravery or heroism the day he/she joins the service,” he said, laughing.

Dennis Maconey Taylor will receive his insignia from Governor General Sir Patrick Allen on October 18, when more than 100 Jamaicans will be honoured on the day for outstanding service to the nation.