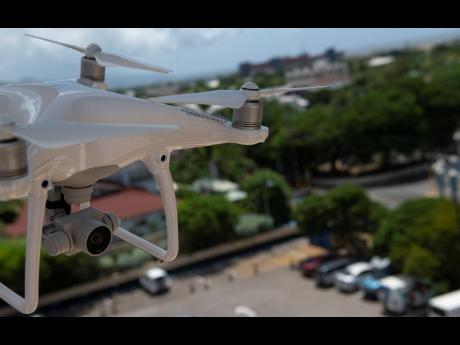 Jamaicans who feel their privacy is being violated by drone operators flouting regulations set out by the Jamaica Civil Aviation Authority (JCAA) could face mountains in getting redress.

In fact, more than five years after rules were announced for the growing use of these devices, the local authorities are having difficulty bringing offending drone operators to book.

First, they have to be identified, said Rohan Campbell, deputy director general at the JCAA, and that brings severe challenges when the unmanned aerial vehicles (UAVs) – defined as a power-driven aircraft, other than a model aircraft, that is designed to fly without a human operator on board – are flown beyond their visual line of sight. This makes it harder to locate operators, who could be metres – or even miles – away depending on the type and range of the drones.

Second, while JCAA stipulations and privacy laws provide against UAVs being operated over private property without the owner’s consent, there is little the JCAA can do about it, and the issue is reportedly not high on police radars as complaints are seldom filed.

“Typically, complaints like those would go directly to the police force. The JCAA’s interest in drones is how they are operated in the airspace and certain regions that are going to affect the safety of flights. Why these drones are being operated and what they are being used for is another matter for the police,” explained Campbell.

Among other things, the guidelines also stipulate that an aerial device should not be operated over a private or public property or dwelling, without prior permission; at night or during low-visibility conditions; with the intention of dropping or discharging any items to the ground; and within or over restricted or prohibited airspace.

All accidents or incidents that occur while using the device must also be reported to the agency so that the cause can be determined and corrective measures implemented.

JCAA inspectors and law enforcement officers have the authority to intervene at any time when devices are being operated to ensure that their use is in keeping with regulations.

“Enforcement of breaches of certain rules of the air would be with us, the JCAA. So we are sort of segregated. ... If a person uses a drone to capture images in your bedroom that is a matter for the police,” Campbell told The Sunday Gleaner, adding that over the last year, there has been only one instance in which the police were summoned after a drone was flown in the Norman Manley International Airport airspace. The airport authorities and the police tried without success to locate that operator, who subsequently recalled the machine.

Drone usage is becoming more common locally, with the number of applications for permits filed for commercial usage on the increase.

This 2021-2022 JCAA financial year – with roughly six months left – had seen 156 applications for commercial drone usage up to October 7.

As per the regulations, these permits for commercial use must be had before drone take-off. Recreational drone usage, however, is a little more tedious to tether down.

Jamaicans have been expressing concern over possible invasion of their privacy by inconsiderate drone operators. Some spoke of the fear of having these devices flying over their homes on one popular social media site, noting concerns about the operators’ motives. Others threatened to take down trespassing machines.

“Anyhow it pass back yah mi a fling stone affa it. Mi nuh want nobody watch me,” one person tweeted in a discussion about drone activity.

NOT IN BEST INTEREST

Such actions, however, may not be in the homeowners’ best interest, even though they have a right to property, attorney-at-law and former president of the Jamaican Bar Association, Emile Leiba, told The Sunday Gleaner.

“In respect of the drones, there isn’t any current legislation covering it, but in the context of somebody hitting down a drone or trying to destroy it, I think, fundamentally, it would boil down to the fact that you are still destroying someone else’s property,” Leiba said as he weighed in on the matter.

“So there would still be that offence of malicious destruction of property if it is that somebody destroys a drone that is over their property,” he continued. “There is a right to defend your property from trespass, but then it is arguable as to whether you own the air over your property.”

Damion Brown, creative director at Just Create Productions, who has been a drone operator for five years, explained that sometimes, it is inevitable that drones will have to fly over private property on some jobs, but the thought of using the technology for spying is dastardly.

“I have instances where I have a job and I have to operate my drone in New Kingston and they would want aerial shots. Now New Kingston is a business district, and from time to time, the drone is going to go over houses and other private properties. So it is something that you really have to look into and think about ‘cause I would not want a man to invade my privacy, but on the other hand, I’m operating a business,” he noted.

“It is definitely a matter of concern; there are two sides to it,” said Brown, who has had to seek security clearance from security personnel of some properties while carrying out his job.

Meanwhile, Nari Williams-Singh, director general of the JCAA – who, while outlining the regulations in 2016, said that the aim was to persuade operators to do the right thing – is still optimistic about the industry despite obvious kinks.

“Drone technology has become very important in the aviation landscape. They are used in a lot of different types of operations. Earlier out, it may have been considered a fad, but it really does have a genuine space in the aviation landscape and so we have been accommodating the operations of drones,” he said. “Now, they ought to be regulated like other aviation activities so they can operate safely in the airspace.”