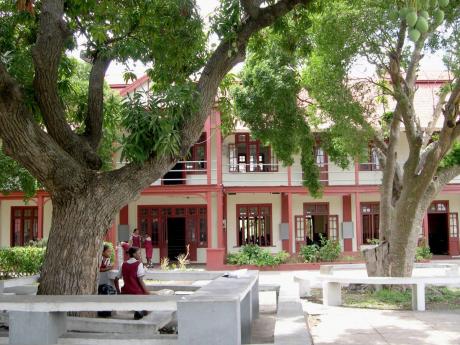 File
File Keeva Ingram, principal of the St Andrew High School for Girls, says the institution may have to scale back its sixth-form offerings if it does not have enough funds to pay personnel and provide resources for students.

Some school principals are pushing back against a Ministry of Education directive to not insist on fees for sixth-form programmes, arguing that apart from the $17,000 that the State contributes for each grade 12 and 13 student being woefully...

Some school principals are pushing back against a Ministry of Education directive to not insist on fees for sixth-form programmes, arguing that apart from the $17,000 that the State contributes for each grade 12 and 13 student being woefully inadequate, it is sometimes remitted up to a year late.

In a July 31 bulletin this year, the education ministry reminded schools of the non-mandatory fee policy for infant, primary, and secondary educational institutions.

The ministry said it was “already contributing to the fees of students in the traditional sixth-form programme through the regular grant”, and that the Sixth Form Pathway Programme allows “for $60,000 to be provided for each student enrolled and completing the programme in public tertiary campuses and $80,000 at the private tertiary campuses ... ”.

The schools have also been advised that since the ministry has not made a policy for sixth-from students to pay fees, they should ensure that they “utilise the resources and opportunities being provided by the ministry and remove the burden from the students and their parents”.

The Cabinet recently approved a proposal for the establishment of seven years of secondary education in Jamaica to allow all students to have access to learning opportunities in sixth form.

The Sixth Form Pathways Programme is intended to ensure that students exit the secondary system with improved certification to allow them to transition to tertiary education or the work force.

“The mainstreaming of a seven-year programme of educational training and experience is expected to meet the needs of students more efficiently and effectively and respond to local and international demands vis-à-vis 21st-century skills, competences, and certification,” Education Minister Fayval Williams said during an October 6 press briefing.

Up to press time, the education ministry had not responded to a Sunday Gleaner request to shed more light on the issue and respond to some of the principals’ concerns as shared with our news team.

The principals contend that since sixth form requires a greater level of resources to deliver courses to have students pursue higher education and enter the world of work, the loss of revenue from fees will severely impair their ability to effectively run their programmes.

Kinks in the system

They also lament the “lack of consultation” with stakeholders, which has resulted in several kinks in the system, which is being tested this academic year, with full roll-out expected for the 2022 academic year.

At present, only 35 per cent of the average 40,000 students completing grade 11 transition to a sixth-form programme.

Speaking with The Sunday Gleaner last Wednesday, St Andrew High School for Girls Principal Keeva Ingram said that her school will be severely affected if it is to do without the $62,000 fee charged for its sixth-form programme.

“The challenge that we are having at our grades 12 and 13 levels is that more resources are required to implement the advance level programme. We need resource teachers, equipment for labs, and other things. What it means is that some of the facilities and programmes that we offer are being threatened because if we can’t afford to pay those resource persons and provide the resources, it may be that we have to remove them because there is just no money for it,” she argued.

“I just received payment this September for last academic year. So if we didn’t have parents contributing, I couldn’t pay the teachers, and it would have been that the same students who are not paying wouldn’t have had good teachers,” Ingram added, noting that the issue of late payments by the ministry has been occurring for some time.

“It was good for a while, but for the past two years, we have had issues,” she said.

Just half of her current batch of 135 grade 13 students has made a contribution in fees.

Though not new, the Government’s non-mandatory fee policy stresses that “schools should not force parents to pay fees for services that the ministry has already provided and has committed to continue provide”.

In its July bulletin, the education ministry noted that “parents continue to face great challenges due to the COVID-19 pandemic [and that] the ability of their children to access mandatory education should not come with additional burden”.

This is welcome news for Loraine, whose son attends the Glenmuir High School in Clarendon.

“I am to pay $38,000 for sixth form, plus another $5,000 for contribution to some project, and it don’t pay yet,” she told The Sunday Gleaner days ago, questioning the cost, given the virtual-learning modality.

With a November 1 deadline stipulated by the school to pay the fees, she said, “I don’t know how that gonna go because I don’t see the money yet.”

Leaning on the education ministry’s directive, she said, “If Government seh wi mustn’t pay, that mean we mustn’t pay.”

Such a stance is of concern for another Kingston-based principal, who asked not to be named for fear of backlash from the ministry.

“If we are not able to hire part-time teachers for the sixth formers, we will have to push the work on the government teachers who can manage it, and it seems, by the minister’s reasoning, that this should not be a problem since we are only having online classes,” the principal said.

For Linvern Wright, president of the Jamaica Association of Principals of Secondary Schools, the strict application of the non-mandatory fee policy for sixth-form programmes could have adverse effects on the operations of schools.

“There are schools that have programmes that are predicated on a certain budget. With the limited amount allocated by the ministry, many persons are concerned that it might not be adequate for the kinds of things they want to do with their sixth-form programmes,” he told The Sunday Gleaner.

Checks by The Sunday Gleaner revealed that the basic fee charged for sixth form across the island ranges from $25,000 to $80,000 per student.

Meanwhile, the long wait for external exam results to see whether they will be accepted into lower sixth form (grade 12) has left some students with mixed feelings.

Many schools have opted to wait on the release of Caribbean Secondary Education Certificate (CSEC) and Caribbean Advanced Proficiency Examination (CAPE) grades by the Caribbean Examinations Council before starting their grade 12 students in online classes while some used grades from the grade 11 internal assessments and teacher recommendations to determine which students to enrol.

Many schools are now just getting their programmes going with Friday’s release of the CSEC and CAPE results, delayed due to the late hosting of exams this year because of the pandemic.

The situation seemed easier for grade 13 students, who matriculated based on their performance in the previous grade.

“They had two options: either wait on the results or just start school from September. They started us in the middle of the term, and now, some students may get kicked out of the classes based on their grades because they may have to resit,” one 16-year-old teen said, labelling the approach as “kind of stupid”.

For Loraine’s son, resuming school – albeit late – “makes me feel better because I’m glad I have something to do now”.

He believes that the sixth-form classes could have started in September using grades from the previous year to make it easier for students.

As one principal noted, with this delay, there could be a lot of catching up to do.