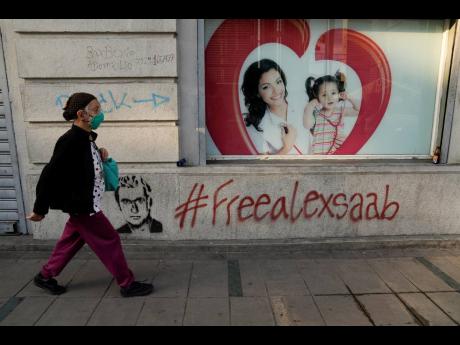 AP
A pedestrian walks past graffiti asking for the freedom of Colombian businessman and Venezuelan special envoy Alex Saab, in Caracas, Venezuela, on Saturday. Saab, a top fugitive close to Venezuela’s socialist government, was put on a plane from Cape Verde to the United States to face money-laundering charges.

Prime Minister Dr Keith Rowley on Saturday brushed aside efforts by the Opposition Leader Kamla Persad Bissessar to remove President Paula Mae Weekes from office, announcing also that over a year ago he had written to the Police Service Commission (PSC) indicating that he had lost confidence in then Police Commissioner Gary Griffith.

“I am here talking to the population to tell me specifically what do you know that the president of Trinidad and Tobago has done that requires impeachment,” Rowley told a news conference, adding that he is aware of the requirements being made for him to resign.

“So let’s impeach the president. She and her 19 imps, pimps and chimps, they put their name on a list and will come to the Parliament and debate the conduct of the president. It is for good reason that our constitution says that the action of the president cannot be queried in a court of law because they want to save us from ourselves.

On Friday, Persad Bissessar told reporters that she had filed a motion in the Parliament for the establishment of a tribunal to investigate the removal of Mae-Weekes.

Persad Bissessar said that the motion had the backing of all of her other 18 opposition legislators and that the move was in keeping with her commitment to “use all the powers available to me under the constitution to hold those in office accountable”.

The opposition leader claims that Mae-Weekes, who has not made any public statement regarding the controversy surrounding the appointment of a new police commissioner and the resignation of the entire membership of the PSC, brought her office into disrepute by bringing into contention the independence of the PSC.

St Lucian Prime Minister Phillip J Pierre has called an end to a state of emergency that had been put in place by the last administration to curb the spread of the virus that has so far killed 232 and infected more than 12,000 others since March last year.

He said while the science validates the restriction of movement of people has led to a decline in the number of COVID-19 positive cases, these restrictions caused “great personal challenges”.

“As we strive to find the right balance between securing some level of normality in our daily lives and fighting the COVID-19 pandemic …the COVID-19 virus looks like it will be with us for the foreseeable future and we must therefore commence the process of living with that reality while taking the necessary measures to avoid a dysfunctional society,” Pierre said last week, adding, however, that the restrictions to the opening of business hours where citizens meet for socialising would be maintained.

Mask rules, vaccination mandates and business shutdowns have all landed in the courts during the COVID-19 outbreak, confronting judges with questions of science and government authority. Now they are increasingly being asked to weigh in on the deworming drug ivermectin.

At least two dozen lawsuits have been filed around the US, many in recent weeks, by people seeking to force hospitals to give their COVID-stricken loved ones ivermectin, a drug for parasites that has been promoted by conservative commentators as a treatment despite a lack of conclusive evidence that it helps people with the virus.

Interest in the drug started rising toward the end of last year and the beginning of this one, when studies – some later withdrawn, in other countries – seemed to suggest ivermectin had some potential and it became a hot topic of conversation among conservatives on social media.

The lawsuits cover similar ground. The families have gotten prescriptions for ivermectin, but hospitals have refused to use it on their loved ones, who are often on ventilators and facing death.

There has been a mix of results in state courts. Some judges have refused to order hospitals to give ivermectin. Others have ordered medical providers to give the medication, despite concerns it could be harmful.

In some cases, an initial order to give the drug has been reversed later.

Hospitals have pushed back, saying their standards of care don’t allow them to give patients a drug that hasn’t been approved for COVID and could potentially cause harm, and that allowing laypeople and judges to overrule medical professionals is a dangerous road to go down.

Framed by the Capitol, United States President Joe Biden paid tribute on Saturday to fallen law enforcement officers and honoured those who fought off the January 6 insurrection at that very site by declaring “because of you, democracy survived”.

Biden spoke at the 40th Annual National Peace Officers’ Memorial Service to remember the 491 law enforcement officers who died in the line of duty in 2019 and 2020. Standing where the violent mob tried to block his own ascension to the presidency, Biden singled out the 150 officers who were injured and the five who died in the attack’s aftermath.

“Nine months ago, your brothers and sisters thwarted an unconstitutional and fundamentally un-American attack on our nation’s values and our votes. Because of you, democracy survived,” Biden said. “Because of these men and women, we avoided a catastrophe, but their heroism came at a cost to you and your families.”

Hundreds of officers and their families sat on chairs assembled on the Capitol’s west front. Some in the audience dabbed their eyes as the president drew connections with their loss and his own history of grief, including the deaths of his first wife and two children, comparing it to “losing part of your soul”.

Biden also underscored the heavy burden placed on law enforcement officers, and rebuked the “defund the police” political movement, saying that those gathered before him would get “more resources, not fewer, so you can do your job”.

“We expect everything of you and it’s beyond the capacity of anyone to meet the total expectations,” Biden said. “Being a cop today is one hell of a lot harder than it’s ever been.”At the ceremony, Biden expressed concerns for all officers in the line of duty and mentioned the three constable deputies shot in an ambush early Saturday while working at a Houston bar. One deputy was killed.