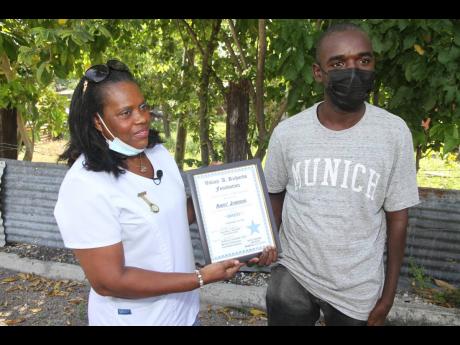 Nathaniel Stewart
Amoy Johnson (right), of York Town, Clarendon, receives a certificate from Faustina Richards for his act of honesty. 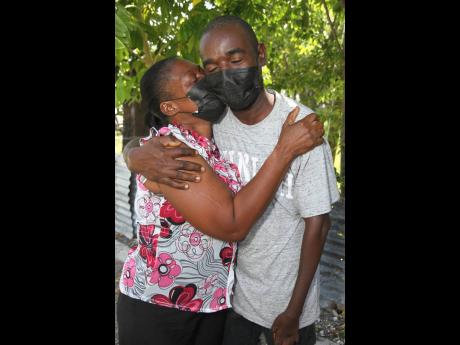 Nathaniel Stewart
Amoy Johnson (right), of York Town, Clarendon gets a hug and a kiss from his mother, Sandra McDonald-Currie after his act of honesty was recognised at his home on Monday, October 11.
1
2

Amoy Johnson’s story epitomises the notion that one act of kindness can change a person’s life. On September 30, Nurse Faustina Richards collected remittances from a Western Union outlet in May Pen, Clarendon, with the intention to pay a bill.

However, upon reaching the entity to make her payment, she realised that she had lost the envelope with the funds. In a fortunate turn of events, Johnson found the envelope and made contact to have the funds returned the next day. Last week Monday, a grateful Richards ventured into York Town in the parish to locate the good Samaritan, and presented him with book vouchers for his children, among other donations. Johnson had made contact with Richards by sending a message to the sender’s phone number on the remittance receipt. The sender was Richards’ daughter who lives overseas. She said she would have her mother contact Johnson.

“I met him in May Pen and when I saw this young man coming with my envelope, it brought tears to my eyes. The first thing that came to me was his [disabled] hand, and I said, ‘This man is in need and he could take my money and he did not. He chose to do the right thing,” expressed a grateful Richards. She told The Gleaner she was taken aback when Johnson explained that he was taking some of his food from their lunch date for his two-year-old son. Moved by the thought, she requested a picture of Johnson’s son later than night, which subsequently led her to making some decisions that would change Johnson’s life.

“I said, ‘That child is now my child and you are my son just because of what you did. From now on, I’m going to make sure everything is alright with you.”

Richards told The Gleaner that her friends and relatives overseas are supporting her on the venture, and have started packing items for Johnson’s family. She has since promised him a construction job at her home.

“This man won my heart. He’s loved by my family already and they don’t meet him as yet,” she said.

Johnson, whose left hand was rendered disabled from an accident almost three decades ago, burns charcoal and sells ackee, or as he puts it, “any fruit in season” for a living. He said his disability is no deterrent for him, as he remain relentless in providing for his family of four.

Johnson attributes his honesty to the values instilled in him by his mother, Sandra McDonald-Currie. McDonald-Currie, the mother of eight boys, said the Church played an integral role in the upbringing of her children. “When they were growing up, I always teach them not to trouble what don’t belong to them. Even to take something from my fridge ... even a little sugar, they had to ask. When they were going to school, they couldn’t bring a pencil or nothing home (that didn’t belong to them), they had to take it back.” the mother added.

Referencing dire needs of his own, Johnson said, “It’s not that I’m not in need, but the person who lost the money may be in [greater] need. I didn’t look at my need. If it was a million dollars, I would have done the same. Once there is information to lead to the owner, I would have taken the same steps. There are two things I seek when doing something – a thank you and God’s blessing.”

Citing his community as one plagued by crime, Johnson said he is pleased to bring about some positive news. “Most of the time on the news, York Town is in negative terms, but this time around, it’s on a positive term. I am glad that I was available at that moment to say I’m from York Town and I have done something good,” he beamed.

Member of Parliament for Clarendon South Western Lothan Cousins and councillor for the York Town division, Uphell Purcell, were on hand to witness the donation. Purcell commended Johnson’s gesture and said he was pleased to venture into the community on a different note than crime.