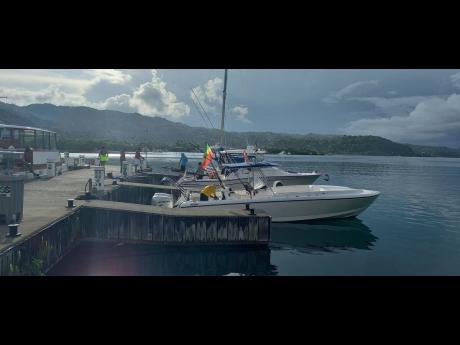 Gareth Davis
Three of the seven boats that participated in the low-key Superstars of Port Antonio Blue Marlin Tournament from October 13-15.

In what has been described as a low-key and symbolic tournament, the Mayberry Investments-sponsored Superstars of Port Antonio Blue Marlin climaxed on Friday with seven billed fish tagged and released.

The tournament, which saw only seven boats participating due to the global COVID-19 pandemic, started on Wednesday with several anglers who, according to chairman of the tournament, Robert ‘Bobby’ Stewart, were rather hungry and anxious to fish and wanted some excitement.

“Angling, among other sporting disciplines, has been hard hit by COVID-19, and it was only at the last minute that we decided to hold this tournament,” said Stewart.

“It’s a very sombre and difficult year all around. And we felt the need to keep the competition and the alive. This year there was no entry fees, and there were no events. But really, we had about seven boats that just wanted to fish the weekend as a show of support for next year. We had some boats that only fished one day, and we had some that fished all three days. We are grateful for Mayberry’s support, which allowed for the staging of this tournament.

“There were seven marlins released, and many more were hooked. A lot of them surfaced and struck. Considering the small number of boats, we got 1.35 marlins per boat for the event, which is respectable. I think everybody was looking forward to the event coming back in full strength. COVID is the grinch in the room. The anglers were very grateful that an event was put on, and many are already looking forward to the tournament next year,” he added.

The boat, Still Keeping it Jiggy , managed to release three marlins on Thursday, while only two of the seven boats failed to release a single marlin in a tournament that was arranged at the last minute.

According to Stewart, who boasted that at least five boats from the Cayman Islands will compete in next year competition, there were many requests from anglers all over who wanted to participate in the tournament. However, the decision was taken to adhere to the health guidelines set by the powers that be, and to obey the basic protocols as it relates to COVID-19 and the Disaster Risk Management Act.

Stewart said that he is anticipating no less than 30 boats to participate in 2022 Superstars of Port Antonio Blue Marlin Tournament, which will provide added incentives and varied prizes for anglers.