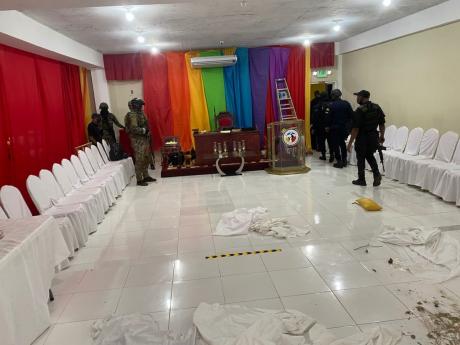 Law enforcement authorities have confirmed that a policewoman is among those detained following last night's bizarre incident at the Pathways International Kingdom Restoration of Montego Bay in St James.

The cop was among congregants at the Norwood Avenue building, said to be the home of a cult, where a ritual was being performed.

In the meantime, more details are emerging about the night of terror in which three people were killed.

It is reported that two had knife wounds.

One man was shot dead by the police when they responded to calls for help.

A woman, dressed in white who was laying in blood, appeared dead.

Head of the St James Police Division SSP Vernon Ellis said the police recovered a pistol and several rounds of ammunition from the scene.

The Independent Commission of Investigations is probing the matter.

In the meantime, the police have detained almost 40 people who were meeting at the Norwood Avenue building in Paradise.

The congregants, all dressed in white, were taken away in a Jamaica Defence Force truck.

One woman who was spotted leaving the building had one hand raised to the heavens and the other clutching a toddler.

Neighbours told The Gleaner that around 7 p.m, they heard heavy gunfire and then the screams of members.