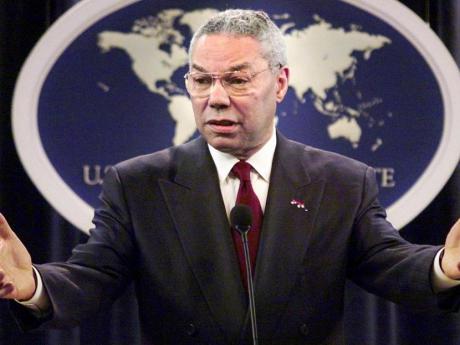 In this May 21, 2001, file photo, Secretary of State Colin Powell talks with reporters during a news conference at the Department of State in Washington. Powell, former Joint Chiefs chairman and secretary of state, has died from COVID-19 complications. In an announcement on social media Monday, the family said Powell had been fully vaccinated. He was 84. (AP Photo/J. Scott Applewhite, File)

Prime Minister Andrew Holness and Leader of the Opposition Mark Golding have hailed the life of former US Secretary of State Colin Powell who has passed away.

In announcing his death on social media, Powell's family said he had been fully vaccinated.

This is a form of cancer of the plasma cells that suppresses the body's immune system placing him at greater risk of the virus.

“We have lost a remarkable and loving husband, father and grandfather and a great American,” the family said.

Powell is the first Jamaican-American to serve on the Joint Chiefs of Staff as Chairman.

In his tribute, Holness said that Powell lived a distinguished life of service.

He noted that he had the distinct pleasure of meeting him in 2018.

“We have had many good conversations and very interesting discussions about Jamaica and the developments taking place.

“On behalf of the Government and people of Jamaica, I extend heartfelt condolences to the family of former US Secretary of State, General Colin Powell as well as the people of the United States,” said Holness.

For his part, Golding said he was sad to learn about Powell's passing.

“He was a trailblazer who shaped American foreign policy over several administrations. Condolences to his family and friends. May he rest in peace.”

Born April 5, 1937, Powell was the son of Jamaican parents, Luther and Maud Powell.

A veteran of the Vietnam War, Powell rose to the rank of four-star general and in 1989 became the first Black chairman of the Joint Chiefs of Staff.

But his legacy was marred when, in 2003, he went before the UN Security Council as secretary of state and made the case for US war against Iraq at a moment of great international scepticism.

Iraq's claims that it had no such weapons represented “a web of lies,” he told the world body.