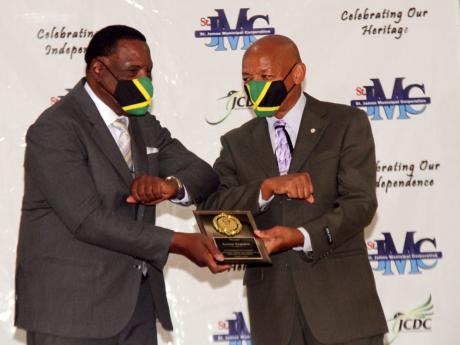 Mayor of Montego Bay Leeroy Williams (left) presents Clinton Pickering with the Sam Sharpe Award for his work in the field of journalism at a civic ceremony on October 15, 2021 – Contributed photo.

Some 26 St James residents have been honoured by the St James Municipal Corporation and the Jamaica Cultural Development Commission for their contributions to the development of the parish.

Among those recognised at the parish's Heroes Day Civic ceremony, which was held on Friday, were media practitioners Clinton Pickering and Byron McDonald.

Pickering received the Sam Sharpe Award in recognition of his contribution to the field of journalism for over 40 years.

McDonald was presented with the Mayor's Special Award for his over 40 years in journalism and media.

“Clinton Pickering's fingerprints have been left on newspaper pages such as the Beacon, The Gleaner, The Star, and today the Western Mirror where he is a regular contributor,” read a section of his citation.

Pickering, who for years has been keeping Radio Jamaica listeners up-to-date on happenings in western Jamaica through the station's rural and traffic report programmes, expressed his appreciation to the people of the parish and promised to continue working to develop his community.

“Throughout my nearly 50 years as a journalist, it certainly feels good that one gets recognised for their contribution. It was never about working for an award. I have been working and will continue to work towards the growth and development of my community,” said Pickering, who in the last four decades has worked for several international media houses including the New York Times and the Caribbean News Agency.

As for McDonald, he told The Gleaner that he feels very special to be counted among those who have been recognised for their work.

“I did not see this coming, especially now that I have retired. I am happy that the people of St James have recognised my work, even when it might not look like anything to some. I appreciate it a whole lot,” said McDonald who worked as a radio and television technician.

In his address, Mayor of Montego Bay Leeroy Williams lauded this year's awardees for their contributions.

“Continue to resist mediocrity and redouble your effort for the development of our city and our nation,” Williams said.