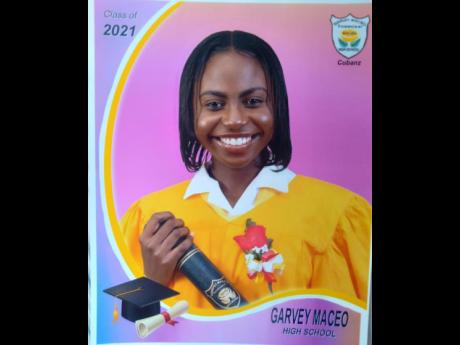 Seventeen-year-old Garvey Maceo High School student Janeel Mills has been battling self-doubt and fear of failure for most of her life. Coming from a community she described as having a history of low performance among its youth, she said she worried about her future, as she didn’t want to be among that statistics.

Confessing that she tends to overthink things, Mills shared that she would drive herself crazy building up scenarios of what would happen if she failed.

Thankfully, friends and teachers at her school always reminded her of her prior accomplishments, which helped to build her confidence. On Saturday, after receiving her Caribbean Secondary Education Certificate (CSEC) results and seeing that she got five ones and three twos, she dedicated her recent accomplishment to all those who boosted her confidence and made it all possible.

Mills told The Gleaner that her path to excelling in the exam was when she acted on a suggestion from her business teacher.

“She encouraged us to find an accountability partner and set a pass mark for the class at 75 per cent, which I later used for all my classes. I also made a timetable for studying purposes, using alarms like crazy, and Zooming with my friends to study from 8 p.m.-11:30 the next morning became a hobby,” she shared.

Adapting to online learning was something Mills had to work her way through, as she described herself as a”visual learner,” thinking she must be there with her teacher face to face.

Living in the community of Savanna Cross, where both broadband networks only cover certain areas, leaving the rest of the community without service, Mills said it made life really difficult, as she had to rely on purchasing a data plan until they were able to secure Wi-Fi from independent means.

That itself was also a problem as, she noted, “It gave more problem than math, trust me; and that happens in the midday, when the sun is boiling and the urge to sleep kicks in,” she recalled dramatically.

Still, she said online classes taught her to be flexible, so that is something she will be taking away from the whole experience.

Happy in bagging the subjects, which were paid for by the Programme of Advancement Through Health and Education, Mills is also grateful for the support from her parents and sister, whom she described as “my biggest support”. She is now looking forward to going on to sixth form, which she has already applied for.