We have your backs 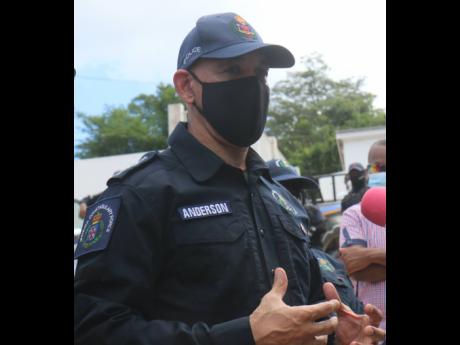 WITH THE St James Police Benevolent Foundation (StJPBF) now up and running, thanks to a J$1.5-million financial input from a philanthropist, Police Commissioner Major General Antony Anderson has said police officers in the parish should now have an extra layer of comfort when they go out to challenge dangerous criminals.

“This type of thing makes a huge difference when officers can go bravely towards the things you described [gang conflicts], to hear the rounds going off and go towards it, instead of away from it, knowing that if the worst happens there is a system that will look after who is left behind (their family),” said Anderson.

The commissioner was speaking at Thursday night’s launch of the StJPBF, which was conceptualised by philanthropist the Reverend Ledger Kellier, who is striving to create an extra layer of protection and support for police officers who regularly expose themselves to danger going after criminals.

Referencing the recent spate of shooting in St James, which has resulted in numerous murders and gunshot wounds, Anderson said police officers in the parish, who fall under the command of Senior Superintendent Vernon Ellis, are facing a stiff challenge but have been responding bravely in serving and protecting residents.

“It’s not everything that we are going to stop because we have people out there who are determined to kill other people, their rivals, and the people they quarrel with,” said Anderson. “But we can safely say the response in St James will always be swift and effective.”

Kellier, who conceptualised the foundation and provided the first $1.5 million to give life to his ambitious project, said he wants to assure the police officers in St James that they have persons out there who are concerned about their well-being and that of their family as they go out to serve Jamaica.

“We want you to see this as extra protection that will make a difference when you go out, knowing that we are here to cover your backs,” said Kellier. “We are seeking to put St James on the map in Jamaica for Jamaicans to know that all police officers who are out there on the street every day, from the moment you put on your uniform and walk through your doors to go to work, we have your back.”

The 69-year-old St James-born Kellier, who migrated to the United States at the age of 19 years old, remains quite committed to helping Jamaica in whatever way he can. He has committed to making a similar donation to the foundation every year for the next five years.