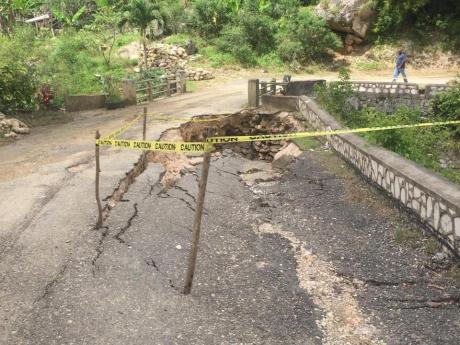 The National Works Agency (NWA) says there's no timeline for when repair work will start on several damaged roads in the Frankfield, Clarendon area.

The poor conditions of roads have worsened arising from recent flood rains.

The update from the agency follows Tuesday's protest by dozens of taxi operators and residents who were lamenting the conditions of the various roadways.

Taxi operator John Brown said the roads in several communities were deplorable for a number of years but were made worse in 2017 and 2018 when three bridges were washed away.

NWA communication and customer service manager, Stephen Shaw, said there are plans to fix the problems but funding has not been approved.

“There are some retaining walls to be rebuilt and sections of the road need attention. Our parish team has done estimates with a view to getting the requisite funding from the Ministry of Economic Growth and Job Creation,” he told The Gleaner.

However, he said that he was not in a position to speak to a timeline as the agency is still awaiting instructions.

Member of Parliament for North West Clarendon, in which Frankfield falls, Phillip Henriques, has described the protest of the taxi operators as “unfair” because neither he nor the municipal councillor, Clive Mundle, were contacted first.

Henriques said since he became MP in September 2020, he has lobbied the NWA to address the issues.

He said that representation was made in May this year to Minister without portfolio in the Ministry or Economic Growth and Job Creation, Everald Warmington, as well as NWA Clarendon parish office to fix the two breakaways – in Kilsyth and Grantham – a key route that links communities with Spalding.

Addressing the taxi drivers' concerns, Henriques said some of the damage took place before his term and that repairs will take some time.

“In fact, the work has gone through the bidding stage and it has been awarded to a contractor already and we are now awaiting the execution of the contracts,” said the representative of the ruling Jamaica Labour Party.

Henriques was not very happy that the operators took action before speaking with him.

“That's not how the process works. They decided to go ahead and do whatever they wanted to do but I am still ready and available to have an open discussion with them on the matter.”

Meanwhile, Richard Azan said up to September last year when he left office as MP, the process was advanced to fix some of the roads.

“I know that I brought it to the attention of the Minister and I know that instruction was given and it (contract) was tendered and a contractor was selected and I know that they were awaiting funding for the work to start in 2020... I don't know what happened after that,” said the recently elected vice president of the People's National Party.