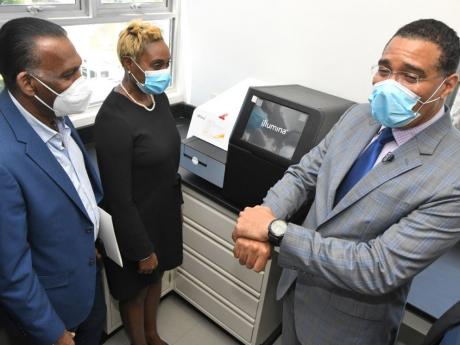 Prime Minister Andrew Holness (right) along with Chief Executive Officer, CHASE Fund, W. Billy Heaven (left), and Juliet Cuthbert-Flynn, State Minister in the Ministry of Health and Wellness, at the handing over of a genome sequencing machine to the University Hospital of the West Indies on October 22, 2021 – Rudolph Brown photo.

Prime Minister Andrew Holness says the Government's efforts to increase Jamaica's vaccination rate are being undermined by false prophets, pseudo-intellectuals and people who are deliberately misleading the public.

“We must never cede the space of the public mind to those persons,” Holness charged.

He made the declaration this morning while speaking at the handing over of a genome sequencing machine to the National Influenza Centre at the University Hospital of the West Indies in St Andrew.

The machine is to test for COVID-19 variants.

Holness' remarks came against the background of the discovery of an alleged ritualistic sacrifice on Sunday on the compound of the Pathways International Kingdom Restoration Ministries in Paradise, Montego Bay, St James.

The church's leader Kevin O. Smith, who has been in police custody since the bizarre incident, has been among those staunchly against mandatory COVID-19 vaccination, likening it to buggery.

“A man forcing something into another man is buggery. A man forcing himself into a woman is rape. No Prime Minister can change common law and common sense!”

Holness noted that the Government has spent billions on the vaccination drive and called for local experts to push back against what he called the false narrative surrounding the vaccine.

“We're not strong on social media combating the nonsense that is being put out. The University of the West Indies, which is the repertoire of knowledge, which we spend billions of dollars on, has a duty and a responsibility to be a strong voice in all spaces to ensure that the public is properly guided,” said Holness.