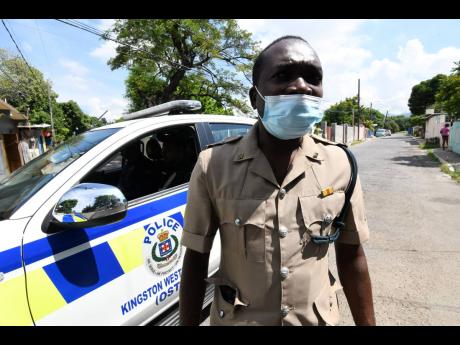 Rudolph Brown
Inspector Horatio Rowe and his team patrol Lincoln Avenue after a resident was murdered in a drive-by shooting on October 14. 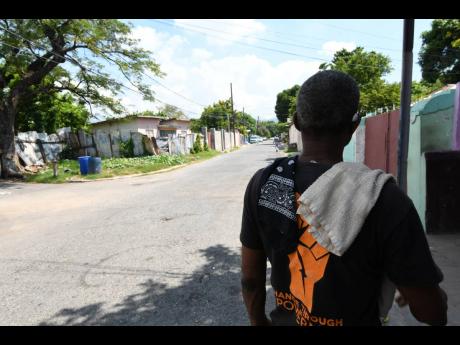 Rudolph Brown
A grieving father looks at the spot where his son was killed in a drive-by shooting on October 14 on Lincoln Avenue.
1
2

Daniel Sinclair was looking forward to celebrating his 21st birthday on October 19, and one of his plans before his demise was to start the construction of a new house for both his brother and father.

More than 100 building blocks now lay stacked in his yard as evidence of his shattered plans.

On October 14, Sinclair took a day off from work and was speaking to his neighbour when he was fatally shot during a drive-by shooting on Lincoln Avenue in Kingston.

During a visit to the community days later, residents told The Gleaner that Sinclair was talking to his friend, Christopher Williams, who was also shot, when armed men travelling in a motor vehicle pulled up and started firing at them.

According to Sinclair’s father, who did not want to disclose his name, he now wishes that Daniel had gone to work that fateful Thursday.

“All now mi waa ask him why dem never go [to work]. Dem go [to work on] Monday, Tuesday, Wednesday, and a yesterday (October 14) mi see di man deh ya and thing, so mi nuh really know why dem did deh ya, because mi know dem have construction work a do,” the father said.

“Him just did fi ina di yard, cause you see round ya, one little war a gwaan round ya and yuh see di next set a man dem weh a war, dem and dem use to par anyway,” the father further explained.

He said Daniel, his second to last child, had many skills in the field of construction and was employed to a site.

Daniel’s mother died in 2010 from heart failure, and his father said he worked in a cookshop and took care of his children until they are now adults, and he showed them the right way to live.

“You see when you live ina dem quarters ya fi 20 and 30 years, the thing dem get immune to you because regular you see it, not because a your own ... the thing get immune because yu a go see some a yuh friend dem a dead and all dem sumn deh. A nuh nothing good still, but mi strong,” he said.

The father is of the view that if there were police presence at the intersection of Beechwood Avenue and Lincoln Avenue, where there is a police post, then armed men would not have entered and opened fire at his son who was standing metres away from the police post.

“A true di police dem never up deh so still mek dat happen. The whole day police never deh deh ... The whole entire day. Me a tell yuh! A nuh somebody a tell yu weh never out deh, because me miself come out early and look and seh, ‘nuh police nuh up desh so! Mi nuh like how up de look ya now!’ A same thing mi seh,” Daniel’s father explained to The Gleaner.

Police officers were, however, seen in their vehicles patrolling the area and Inspector Horatio Rowe, shift commander of the Kingston West Division, told The Gleaner that the police were present at the post residents said was vacant.

“Currently, we are managing this space well. You would have observed that several patrols are in the area. We have also been carrying out several responsive operations in regard to what is happening, to ensure that the citizens within this community remain safe,” he said.

When directly questioned if there was police presence at the intersection of Beechwood Avenue and Lincoln Avenue on the day of the shooting, his response was “that could not be so”.

He added, “If you look on the response of the police, you will observe that within a short period, the police responded to basically quell whatever took place. Police persons were indeed in the space, based on the police response.”

However, residents are adamant that the police were not at their post when the shooting occurred.