Slater: No vaccine choices in UK 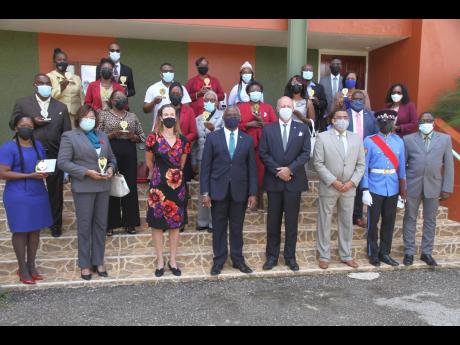 Nathaniel Stewart/Photographer
Manchester Custos Garfield Green and British High Commissioner Judith Slater celebrate with justices of the peace and medical professionals during a ceremony to honour their commitment to the COVID-19 fight in the parish at Church Teachers’ College in Mandeville yesterday. 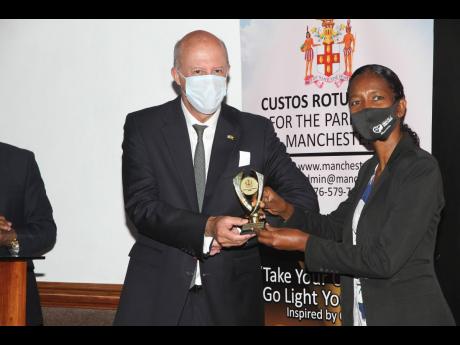 Nathaniel Stewart/Photographer
Philip Slater, husband of British High Commissioner Judith Slater, presents a special award to Dr Nadine Williams in recognition of her work in the COVID-19 response in Manchester.
1
2

With a high percentage of the population still reluctant to being inoculated, and some locals admitting to delaying the process until their preferred brand of vaccine is available, British High Commissioner Judith Slater said that ramping up vaccination efforts and helping Jamaica get through the pandemic will be her first priority.

“ ... In the UK (United Kingdom), you don’t have a choice about what vaccine you take. You get given a vaccine, and you are grateful, and off you go. I went along and got my vaccine, and I was given AstraZeneca, my husband got Pfizer, our son was given the Moderna ... and as far as I am concerned, they are all safe,” said Slater, who succeeded Asif Ahmad as Britain’s top diplomat locally last week.

The first woman to hold the post, Slater was the guest speaker at an awards ceremony in Mandeville yesterday as a number of justices of the peace (JPs) and medical professionals were being honoured for their commitment to the fight against COVID-19 in the parish.

Slater said that although there was some level of vaccine hesitancy in the UK, they have managed to vaccinate 86 per cent of the population aged 12 years and over.

Jamaica is among a few regional countries still struggling to break the 20 per cent vaccination barrier, with approximately 12.3 per cent reportedly full jabbed up to late last week.

Last month, concerns were raised following news of the UK not recognising Jamaica’s vaccination code, which meant that locals who were fully jabbed would be deemed unvaccinated on arrival in the European country. However, the British High Commissioner later revealed that the situation arose from the country’s amber travel status due to its high positivity rate.

Foreign Affairs Minister Kamina Johnson Smith has since revealed that the UK would begin to recognise Jamaica’s COVID vaccination cards.

Through the Department for International Development, Slater said that the local health sector would receive an £8-million (J$1.67 billion)-boost to help health centres across the island become more disaster-resilient.

“One of the facilities we’ll be helping is the facility here in Mandeville, which is going to be upgraded to what is called gold-resilient standards,” she said.

In helping to strengthen the UK-Jamaica partnership, Slater added that despite the harsh economic downturn, she would be ensuring that the country benefits from available funding.

“One of the devastating effects of COVID-19 has been on the world economy, so the money that we have to give out is under pressure, but a part of my job is to advocate for spending money here in Jamaica,” she added, citing climate change and natural-disaster resilience as well as agriculture and crime and violence as being among other areas of focus for her tenure.

Yesterday’s ceremony also facilitated the launch of a partnership initiative between Manchester Custos Garfield Green and the Manchester Parish Library to allow JPs access to spaces within all libraries across the parish to carry out their services.