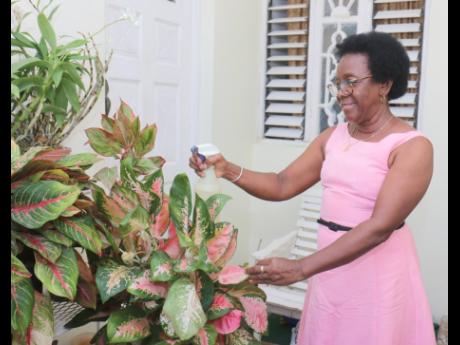 Ashley Anguin/Photographer
Dessine O’Connor Nembhard watering her plants, one of her favourite things to do at her home in Catherine Hall, Montego Bay. 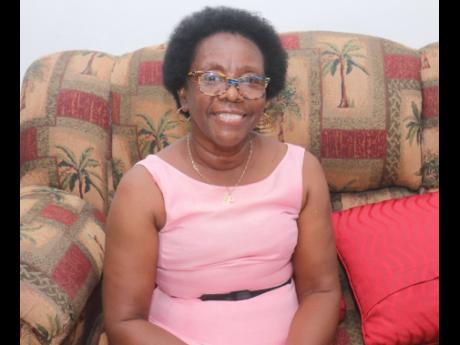 Having lost several family members to cancer, Dessine O’Connor Nembhard is grateful to have survived the dreaded disease.

Nineteen years after the 64-year-old had a double mastectomy, she has become somewhat of a cancer awareness ambassador, steering women battling the deadly disease in a direction of hope.

The mother of two, who makes pillows at her convenience, said that the lump in her breast was so small, neither a mammogram nor an ultrasound detected any malignant cells. It was a biopsy ordered by Dr Delroy Fray, which showed her breasts were, in fact, malignant.

“Recognising that cancer runs in my family, I was not willing to wait for six months to get another test done confirming that I had a malignant tumour,” O’Connor Nembhard told The Gleaner from her Catherine Hall, Montego Bay residence on Tuesday.

“What I want a lot of people to understand is that this body that you’re blessed with, it’s a God gift to you. He said you’re beautiful and wonderfully made, and we need to pay attention to it,” said the woman whose survival was bolstered by the care she took.

“It’s not just what we put on it, but what we put in it, and how we pay attention and watch, because a lot of times we feel things that are unusual in our bodies and we don’t pay it any mind. We ignore it, and sometimes we come to the realities, but we keep hoping and wishing that it’s gonna disappear.”

When Fray told her he had to remove both breasts, she did not hesitate. In fact, she told her husband that she would understand if he decided to leave her.

“I didn’t want any pity,” she told The Gleaner.

A woman of strong faith, O’Connor Nembhard said that her doctor sent her home to read Isaiah 53:5, instructing her to speak the word on her body each day.

“You are going to believe the word and claim the word on your body,” she recalled Fray instructing her.

After reading the scripture, she was hit by the reality that the disease could kill her, but she knew she had to fight to stay alive for her two children.

A firm believer in God, the mother of two said she prayed, asking for time to see her children come of age, owing to the fact her daughter had just passed her exams for the Montego Bay High School.

The healing she asked for came within days, on the eve of her surgery.

While she was in church, talking with the Lord and singing Through it All, she felt a sharp pain across the chest.

By then, she said she felt “cute”, and wanted to stop because she was hollering uncontrollably, but she was no longer in control.

On the day of her surgery, O’Connor Nembhard went to the hospital a changed woman.

“I found myself ministering to the people, encouraging them about the Lord,” she said.

She had left any inkling of fear behind and was shocked at the peace she found, so much so that others were asking what she was doing at the hospital.

“He gave me such peace that I, myself, was amazed.”

Not that the enemy didn’t show its head during surgery, but with her faith binding evil before going under the knife, O’Connor Nembhard became the only patient to be operated on that day.

The surgery was a success.

Except for the inability to lift her right hand, she healed quickly, she told The Gleaner.

Within weeks, she was back at work at her little grocery shop, which she credits today for giving her the fortitude to send her children through university.

With her rock-solid faith, the cancer survivor said what she wants people to take from her trajectory, if confronted by the deadly disease, is to make up their mind to fight with God, no matter how frightening it is.

She said: “If you make up your mind to fight with God, you can win, because the reality is, cancer does not have to be a death sentence.”