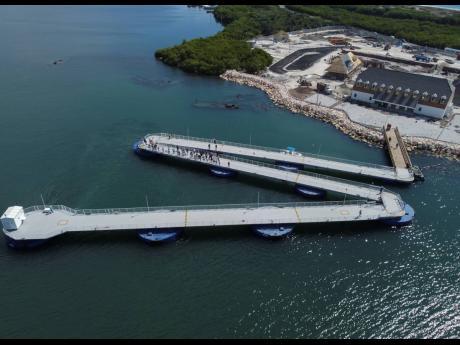 An aerial view of the seawalk floating pier at the Old Coal Wharf in Port Royal - File photo.

Bartlett indicated that the company has confirmed the resumption of flights and cruises to Jamaica, with cruise activities scheduled to begin in January.

The company specifically outlined plans for homeporting in Montego Bay, St James and the inclusion of calls to Port Royal on its cruise schedule.

“We expect to have five calls from January through April 2022 in Port Royal,” said Bartlett.

During the discussions with TUI, the company executives advised that their data shows that the demand for cruises is high and it has managed to retain concealed bookings.

The company also shared that air capacity for this winter season will be 79,000, which is only 9% less than pre-COVID winter figures.

Bartlett sought to assure TUI executives that Jamaica remains a safe destination with very low instances of COVID-19 transmission within the resilient corridors, as well as a very robust tourism workers' vaccination campaign.

“Our worker vaccination drive has been very effective in Jamaica, with many of our workers opting to become fully vaccinated. It is our hope that soon we will be celebrating 30-40% of Jamaica's tourism workers being vaccinated as well as a significant increase in the vaccination of the rest of our population by January,” said Bartlett.

Bartlett noted that he and his team have also had discussions with other key partners in Dubai regarding plans to invest in the tourism product in Port Royal.

“I have had other important discussions in regards to Port Royal, which may see much more activity coming through for the remainder of the year. I have just concluded some discussions with DP World, which could result in significant improvements in the European traffic into the Caribbean, mostly in Jamaica, with Port Royal being a critical area of consideration,” said Bartlett.

“I am pleased with our discussions so far here in Dubai and I am expecting that Jamaica will see some significant investments from these engagements here,” he added.

DP World is an Emirati multinational logistics company which is based in Dubai.

It was formed in 2005 following the merger of Dubai Ports Authority and Dubai Ports International.

DP World handles some 70 million containers that are brought in by around 70,000 vessels annually, which equates to roughly 10% of global container traffic accounted for by their 82 marine and inland terminals present in over 40 countries.