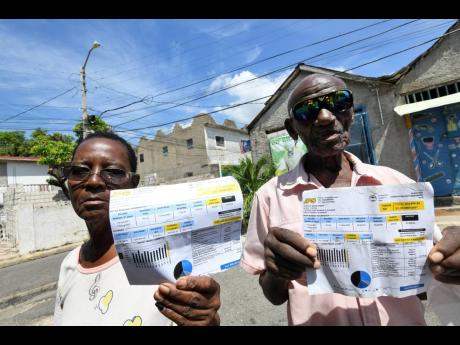 File
File In this September 28 photo, Valerie Grant and Rudolph Campbell, residents of Woodford Park, show electricity bills issued by the Jamaica Public Service Company. They said that consistent outages in the southeast St Andrew community have caused spoilage of meat and other inconveniences.

Despite a cease-and-desist order being served on the Jamaica Public Service Company (JPS) to halt its transformer protection programme, consultations are still under way for a class action lawsuit on behalf of residents of Woodford Park in St Andrew, who have complained about the loss of electricity on a regular basis.

The JPS’s efforts to implement a transformer protection programme, which it argued had been necessary to protect equipment being damaged due to illegal abstraction of electricity, had seen frequent disruptions of home and business supplies with students and teachers engaging in online classes being knocked offline and some call centre staff unable to work from home.

The action has forced the Office of Utilities Regulation (OUR) to issue a cease-and-desist order, instructing the JPS to stop the wholesale denial of electricity to customers.

“The decision of the OUR is now in effect and we are watching to see what happens in the next 90 days of the order. No one seems to have known about the programme from the enquires that I have made, and it gives the impression of some arbitrariness about the action,” St Andrew South Eastern Member of Parliament (MP) Julian Robinson told The Sunday Gleaner.

“We will be watching to see how many times the community loses electricity, during the cease-and-desist order period,” he said.

Attorney-at-Law Ayisha Robb Cunningham said class action suits are a valuable part of the legal system and are precedent-setting.

“In my years of practice, I have never represented anyone seeking to bring such an action, but this is where a number of persons would bring an action to seek remedy to a situation against a body such as the case with the JPS,” she told The Sunday Gleaner on Thursday.

“I can tell you, though, that such an action is taxing on resources with respect to statements and affidavits, because the impact of the action for which the redress is being sought may not be the same for everyone. That would have to be borne out in the affidavits,” she said.

Robinson, a former junior energy minister, said he was not discounting the economic cost of theft to the JPS, which has noted that roughly 83 per cent of the electricity supplied to Woodford Park is illegally abstracted.

“I am not pretending that there are serious issues of electricity theft. There are, and it’s probably bigger than we know, but it can’t be that the paying customers are denied service because people are stealing. There has to be another way,” he said.

St Andrew Western MP Anthony Hylton said some of his constituents have also complained of similar issues, although it is unclear whether they would join the suit if it proceeds.

The JPS has argued that millions of dollars have to be spent annually to replace transformers damaged due to excess load triggered by illegal extractions, which also result in the outages.

It is unclear whether that programme has been effected in sections of southern Manchester, where residents lose power for up to 15 hours weekly. That area received electricity under the Rural Electrification Programme in 1989, when the population size was an estimated 40 per cent of what it is today, based on a crude analysis of electoral data of registered voters then and now.

However, sources connected to the JPS have told The Sunday Gleaner that “little or no investments have been made to the service facility [there] in more than 25 years. With more than 50,000 additional households being serviced by the under-invested Clarendon facility, no wonder [they] lose electricity so often.”

In one instance, a power cut lasted for 23 hours, without notice.

“I have no doubt people there stealing electricity, too. So that area may be affected by a double whammy,” said the source.

Former Energy Minister Phillip Paulwell said that a decision to implement the transformer protection programme would have been taken at the JPS board level, where the Government has two representatives as it maintains a small share in the company.

“The thinking is to bring a class-action suit against them in relation to customers who paid their bills. The OUR, which is the regulator, found out because of the citizens’ outcry and from the Opposition’s questions, but we will now reflect on how to proceed because of the OUR’s order,” he told The Sunday Gleaner.

On Thursday, Energy Minister Daryl Vaz said he was unaware of the programme.

“No idea. Neither OUR nor the ministry was aware,” he told our newsroom.

When contacted, the JPS pointed The Sunday Gleaner to a press release issued following the OUR’s directive, saying that it would not comment further as the matter was under investigation by the OUR.