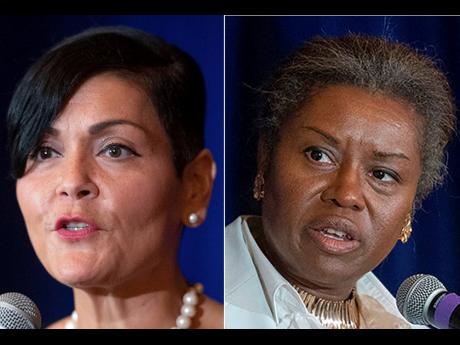 The two women seeking the lieutenant governor’s office in Virginia next month, including a Jamaican, are fond of touting their unconventional political backgrounds. One thing is certain: Whichever one wins will be making history.

Either candidate would be the first woman as well as the first woman of colour to serve in a post that frequently serves as a launching pad to the governor’s mansion. Half of the past 10 lieutenant governors went on to become governor.

The two will compete for votes on the same day Democrat Terry McAuliffe and Republican Glenn Youngkin will vie for the high-profile top seat on the ticket: the governor’s office.

In the lieutenant governor’s race, the Republican, Winsome Sears, is a former Marine who immigrated to the United States from Jamaica as a girl and vaulted to victory in a crowded primary on the enthusiasm generated by a campaign photo of her posing with a military rifle.

The Democrat, Hala Ayala, claims African, Hispanic, Irish and Lebanese ancestry. She frequently refers to her “lived experience” as a single mother who almost died in childbirth.

Sears had a brief stint in electoral politics 20 years ago as a one-term delegate in the General Assembly, representing parts of Hampton roads. Her return to politics after a two-decade absence began when she served as national chairperson for Black Americans to Re-Elect President Trump.

Ayala, on the other hand, was launched into public office by her organizing role in the resistance to President Donald Trump when he was inaugurated in 2017.

Ayala won election to the House in November 2017 and quickly rose through the Democratic ranks to serve as chief deputy whip, helping to shepherd a raft of legislation into law after Democrats took control of the legislature in 2020, including abolition of the death penalty, the legalization of marijuana, and election reforms.

Sears won the nomination by beating five other candidates who were far more active in recent GOP politics.

Ayala, in an interview, emphasised the role the lieutenant governor plays as a tie-breaking vote in the state Senate, where Democrats currently hold just a 21-19 advantage.

When it comes to abortion rights, the lieutenant governor’s post is even more important, she said, because the chamber is essentially divided 20-20 on abortion issues — Democratic Senator Joe Morrissey has voted against some legislation that would have expanded abortion rights in the state.

Ayala noted that abortion rights could become a key issues in state legislatures across the country if the conservative-leaning US Supreme Court weakens abortion protections.

“I am a firewall for reproductive health care, and empowering individuals to make their own choices about their own bodies,” she said.

Asked whether she believes abortion rights need to be expanded, she said she supports enshrining Roe v Wade in the state Constitution. But she declined to say whether she would vote to eliminate Virginia’s requirement for minors to obtain parental consent to get an abortion.

Sears’ campaign declined to make her available for an interview, responding instead with requests for a list of written questions in advance. She has also refused to answer questions about whether she has gotten the coronavirus vaccine, something for which Ayala has criticized her.

During the primary, Sears ridiculed mask mandates put in place by Democratic Governor Ralph Northam, posting a video in which she pulled a mask off a cardboard cutout of Northam and stomped it into the sand, with the Virginia Beach boardwalk in the background.

Sears may be the most unconventional candidate on the statewide ballot this year. She speaks in a stream-of-consciousness style and loves to tell the story of her first campaign for office, when someone superimposed her face onto a pornographic photo.

“I looked good!” she jokes to the audience.

But the story is emblematic, she says, of the obstacles she faced as a Black Republican who was taking on an establishment that expects Blacks to vote Democratic.

“The other side wants to use the problems of the past to define us and we shouldn’t let them,” she told a crowd in rural Chesterfield County earlier this month. “It is time for them to find another victim. ... Yes, we know that there are problems, but we can fix them.”

When she served in the legislature, she earned top ratings from anti-abortion and gun-rights organizations. She touted that record in her successful primary campaign, but has revised her website during the general election to remove those references.

Ayala says Sears is too extreme. In ads, Ayala uses the same photo of Sears posing with a rifle that vaulted her to victory in the primary as a weapon against her.

“My opponent has shown she’s not a leader,” Ayala said. “If somebody shows you who they are, believe them the first time.”