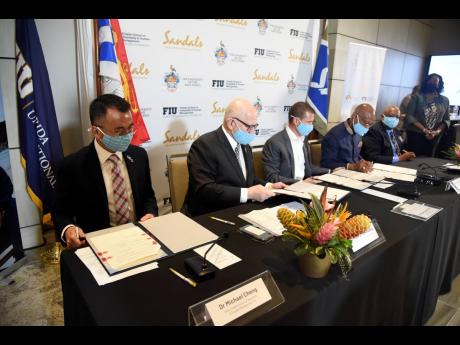 The 40-year-old Sandals Resorts International is looking to extend its footprints in the regional hospitality sector with investments planned for Curaçao in 2022 and St Vincent and the Grenadines the following year.

The disclosure was made by Executive Chairman Adam Stewart at Monday’s signing of a memorandum of understanding for the establishment of the Gordon ‘Butch’ Stewart International School of Hospitality.

The school, named in honour of the Sandals founder who passed away earlier this year at age 79, will be established through a Sandals Resorts partnership with The University of the West Indies (UWI) and Florida International University. The agreement was sealed yesterday during an official signing ceremony to coincide with the 40th anniversary.

Adam Stewart, son of the late tourism giant, said that the Sandals brand remains strong on the global stage, proving that what is born of this region can successfully compete against any brand internationally as he spoke of the transformative power of tourism for regional economies.

“The marketplace, those who pay our bills, we have to evolve at their pace. We have to meet their demands in this ever-changing world,” he said of the reasoning behind the school.

“Tourism is the single most powerful industry across the Caribbean and has the ability to connect with and impact wider industries that we support. This investment will go a far towards mapping the pathway for the survival of the region. Hundreds of thousands of Caribbean nationals depend on tourism, whether directly or indirectly. This school is an investment in our young people, in the future of the Caribbean, and represents our understanding of the critical role of tourism in the future of the region,” Stewart added.

The school will be built at the UWI, Mona – Western Jamaica Campus in Montego Bay.

Touted as the 21st-century symbol of the ideal relationship among private-sector, civil society and academia partners, it is poised to become the flagship standard of hospitality and tourism training institution in the region.

UWI Vice Chancellor Professor Sir Hilary Beckles said the regional university was honoured to be part of the triad – a triangular coming together with an apex that is the future of Caribbean tourism.