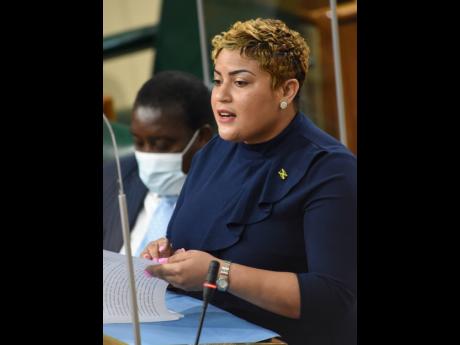 Ian Allen
Krystal Lee, member of parliament for St Ann North Western, as she makes her contribution to the State of Constituency Debate on Tuesday.

Approximately $17 million will be spent on the beautification of Brown’s Town, St Ann, that will include murals to honour several of the parish’s outstanding personalities, including National Hero Marcus Garvey, reggae king Bob Marley, and Olympic champion Deon Hemmings.

In making her presentation during the State of Constituency Debate in Parliament on Tuesday, Lee noted that the amount follows the allocation of $21 million allocated to refurbish the Brown’s Town Market, with that project currently under way.

“Approximately $17 million will be spent on the beautification of the town. This will include reconstruction of parking lots and sidewalks, painting of the town, and creation of murals,” Lee, who was making her first contribution to the debates, disclosed.

She added: “Murals will be of persons from the parish and organisations that are in St Ann that have made a significant impact in the lives of others, either by way of achievements or purpose set, based on the entity they provided service through or individual contributions. Selected murals confirmed so far will be of Marcus Mosiah Garvey, Robert Nesta Marley, Grace Jackson Small, Deon Hemmings, Burning Spear, Romaine Virgo, Shabba Ranks, Busy Signal, Minard Great House, the old York Castle School, and the St Mark’s Anglican Church.”

Lee noted that the murals will begin from the wall at the Anglican Church, to as far as the National Commercial Bank.

“It’s going to be beautiful,” the MP promised.

Lee said other issues affecting Brown’s Town will also be addressed, and this include traffic congestion. Regarding this, the MP said the St Ann Municipal Corporation is to send a proposal to the Factories Corporation of Jamaica for the construction of a two- or three-level paid-parking facility at the car park located in the centre of the town.

She said that in the interim, the Pound Hill road has been rehabilitated to help alleviate traffic entering Brown’s Town, while a study is to be done to look at diverting traffic.

“I wish to further advise this Honourable House that there is a study being undertaken to look at diverting the traffic, creating a bypass in a sense, from the town, for those going to Alexandria and on to Trelawny without entering the town, should they have no reason for going in the town,” Lee said.