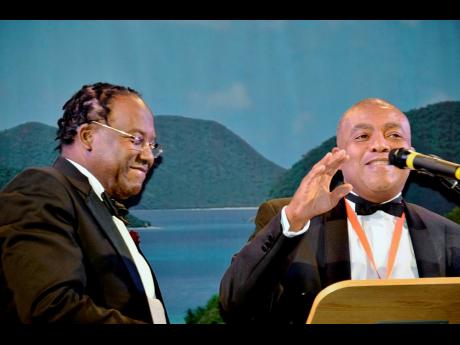 Contributed
Ally Clarke (left) and Wain McIntosh, current chairman of the Friends of the Caribbean (FOTC) at one of the charity’s fund-raising ball in Milton Keynes. 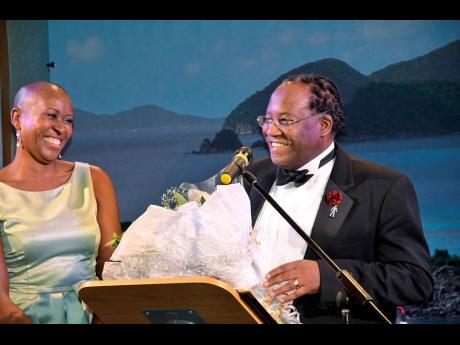 Contributed
Ally Clarke says thanks with flowers to Laverne Walker of Sackville Travel, one of the sponsors of the Friends of the Caribbean charity ball.
1
2

Ally Clarke, a former chairman of Friends of the Caribbean (FOTC), passed away on October 12 at Willen Hospice in Milton Keynes, Bedfordshire, after a long battle with cancer.

A week before he passed, Orman Griffith, his friend and co-presenter on Spectrum Radio, hosted a show to commemorate his work. Many persons who were closely associated with Ally paid tribute, including Derrick Atkinson, first black super-taker captain.

Clarke wore several hats during his lifetime including being the FOTC’s chairman, a local magistrate, a Blackberry European executive and a fundraiser for Prostate Cancer UK charity and the Royal Marsden hospital. In his later years, he was the host/presenter for two radio shows, ‘Big People Reggae show’ and ‘The Smooth Jazz show’.

A Kingston College Old Boy and ardent supporter of the school’s choir in Jamaica, he would visit his homeland to watch their annual performance.

Such was Clarke’s desire to give back and support local causes that he initiated a fundraiser for the Royal Marsden where he was treated for prostate cancer. He aimed to raise 10,000 pounds, which he met with little difficulty. He went on to support Prostate Cancer UK in many others ways, which ultimately led to his appearance in one of the charities most successful ad campaigns, titled ‘Men, we are with you ’.

He was later offered the post of regional representative for the charity in Milton Keynes. A car enthusiast, Clarke targeted the main car dealerships, Porsche, Mercedes and BMW, within the regions educating their workforce on the disease and generating finance to help with cancer research.

He joined FOTC during its third year and was quickly nominated as chairman, a post he held for three years. Under his stewardship, the organisation introduced a very successful mentoring programme at Stantonbury campus in Milton Keynes.

In addition, he was instrumental to the expansion of FOTC’S annual health forums which sought to educate the public on ailments that specifically affect diverse communities. From sickle cell to diabetes, prostate cancer to glaucoma, all ailments were up for discussion and these conversations helped save several lives.

Ally Clarke was a great friend to many in both his private and professional life, but most importantly, he was first and foremost a family man leaving behind his wife, two sons and one grandson. His friends often remark that “once you met Ally, you will never forget him”.

He never forgot my children’s birthdays; they will remember him and because of him will be generous and consistent giftgivers to others.

The essence of Ally Clarke: what he valued, what he fought for and the determined and selfless way in which he battled, has left an imprint on all who knew him. He will not be forgotten and is dearly missed. Funeral service will be on Tuesday, November 2, at Crownhill Crematorium, Oak Chapel, Milton Keynes MK8.