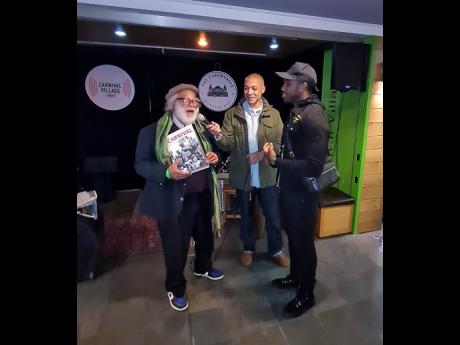 Contributed
Charlie Phillips (left) holds a signed copy of the book ‘Carnival: a photographic and testimonial history’ which he presented to Michail Antonio (right) during a reception at the Tabernacle at Powis Square, London W11 on October 15. At centre is Matthew Phillip, executive director of Notting Hill Carnival Ltd.

Historical photographer Jamaican Charlie Phillips was delighted to hand a signed copy of the popular book of the 50th anniversary of the Notting Hill festivities to Jamaica and West Ham striker, Michail Antonio, during a reception at The Tabernacle at Powis Square, London W11, on October 15.

A photograph taken by him had been chosen as the image for the front cover.

The occasion was the relaunch of the book, Carnival: A Photographic and Testimonial History, and the unveiling of a vast mural representing the cover of the book on the side of a house at the corner of Portobello Road and Colville Terrace.

The relaunch was necessary because the book proved so popular that it sold out, and frustrated customers have been clamouring for more. The original publisher, Rice ‘n Peas, has licensed the reprint to Carnival Village Trust, so proceeds from book sales will help support the Trust’s work at The Tabernacle, Powis Square, and the Yaa Centre, in Chippenham Mews.

In a brief talk before the presentation, Phillips told the audience how he got the shot. He recalled that, 55 years ago, he was working in his photographic darkroom when he “heard all this commotion in the street”.

When he went outside to investigate, he was astonished to see the first organised carnival parade passing his door. So he went back for his camera and started taking pictures.

Charlie emphasised the importance of capturing our history: “We’ve got to document the old times.” He noted that, in the past, the elders were often not very accommodating, which has made the historian’s task a lot harder: “When I was growing up, you couldn’t ask your parents anything, so we’ve got a gap in our history.”