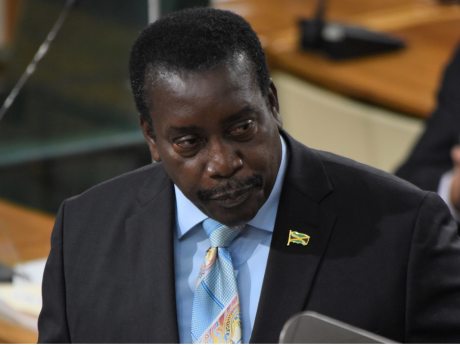 Robert Montague... ignited controversy in the House of Representatives when he refused to answer Opposition questions on the issue saying he wanted the Integrity Commission to complete its work.

The Integrity Commission has asserted that Transport Minister Robert Montague may have violated the law when he told Parliament on Tuesday that the anti-corruption agency is investigating the multimillion-dollar investment scandal at the Airports Authority of Jamaica (AAJ).

Montague ignited controversy in the House of Representatives when he refused to answer Opposition questions on the issue saying he wanted the commission to complete its work.

In a statement Wednesday, the chairman Justice Seymour Panton said Section 53 of the Integrity Commission Act forbids the Commission “or any other person” from making a report or public statement in relation to the initiation or conduct of an investigation until the tabling in Parliament of a report.

“The term 'any other person' applies to and includes parliamentarians,” said Panton, a former president of the Court of Appeal.

Panton who has lobbied for the repeal of the so-called muzzle clause of the Act, did not confirm whether the commission was probing the AAJ and its subsidiary over their $450 million purchase of shares in First Rock, a St Lucia-registered start-up private equity firm.

Civil society advocates and the Opposition have reacted with shock that House Speaker Marisa Dalrymple Philibert yesterday ruled that Montague should not answer the questions because of the alleged probe by the Independent Commission.

The Opposition Leader Mark Golding said there was nothing in rules to support the Speaker's decision that he said was taking the Parliament down a “dangerous path” in blocking lawmakers from questioning the government on issues of national concern.

The AAJ scandal was broken by The Sunday Gleaner in June.

A month later Finance Minister Dr Nigel Clarke told the House that the first of two investments broke the law.

At the time, Clarke was responding to the Opposition.

He threw the spotlight on Montague who has not commented on the issues although he has responsibility for the AAJ and the NMIAL.

September reports carried in The Gleaner revealed that the AAJ board went ahead with the investments despite considering a recommendation in January 2019 not to do so because First Rock had “limited financial and operational history”.

Prime Minister Andrew Holness admitted in July that the scandal raised issues of “grave concern”, but he has since gone silent.