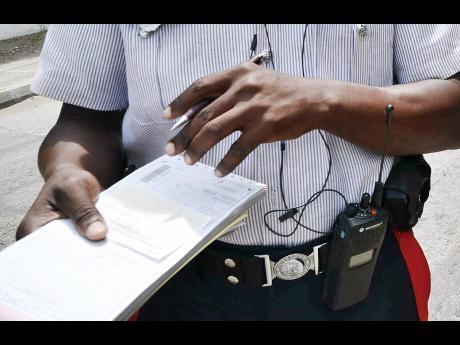 A Supreme Court judge has granted an injunction blocking the police from issuing traffic tickets in excess of fines up to 2006 rates.

The Government's expectation to collect over $200 million in road traffic fines this fiscal year is facing a hurdle following a major Supreme Court ruling today.

A judge has granted an injunction blocking the police from issuing traffic tickets in excess of fines up to 2006 rates.

Justice Sonia Bertram Linton issued the interim order until the trial, in 2023, of the claim brought by Maurice Housen against the Attorney General and the Commissioner of Police.

The case has also become a class action suit after the judge permitted Housen, who is a software engineer, to be the representative of other drivers and motor vehicle owners who were issued traffic tickets and paid a fine or a fixed penalty in excess of the measures approved up to 2006.

One of Housen's attorneys, Gavin Goffe, said the order means, for example, that speeding tickets which now have a maximum fine of $10,000 will have to be rolled back to $2,000.

Housen is contending that fixed penalties for road traffic offences under the 1938 Road Traffic Act have not been increased by the Parliament or the Minister of Transport in accordance with Section 116 of the Act.

He said instead the fines were purportedly increased by the finance minister in 2006 and 2007 as if they were taxes or duties under the Provisional Collection of Taxes Act.

Housen is claiming that the finance minister has no power or authority to increase fines or fix penalties under the road traffic act.

A new road traffic act to replace the 1938 legislation was approved by Parliament in 2018 but has not been brought into force because the regulations to give it teeth are not ready and other laws need to be changed first.

That new law has significantly higher fines for offences such as speeding.

The Director of State Proceedings, who appeared in court today on behalf of the police commissioner, but did not oppose the orders.

Housen argued that the balance of convenience was in favour of granting the injunction because current fines are in excess of what the law allows and further said that there is no evidence before the court on the legal authority used to impose the fines.

He also argued that if the claim is successful, the continued imposition of the fines would be detrimental to the government's finances if there is an order for the state to refund affected persons.

The claim was first filed on July 8 but the orders for an interim injunction were filed on October 21.

In his affadavit, Housen said he received a $5,000 ticket on July 5 for a speeding violation in St Andrew. Following legal advice, he said he believes the ticket was illegally issued hence his action in the courts.

Housen is seeking, among other things, an order for the government to refund persons he's contending have been illegally fined over the last 15 years, as well as a declaration that his constitutional rights to due process have been breached by the imposition of the penalities.

Housen was represented in court today by Goffe, Jahmar Clarke and Matthew Royal from Myers, Fletecher & Gordon, while the defendants were represented by Queen's Counsel Althea Jarrett.