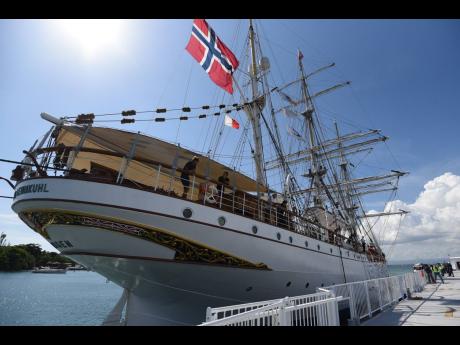 Kenyon Hemans/Photographer
The Statsraad Lehmkuhl docked in Port Royal on Saturday. The Norwegian sailing ship is on a global tour to raise awareness on climate change.

The Naval Dockyard in Port Royal on Saturday welcomed the Statsraad Lehmkuhl Norwegian tour and research vessel for five days to its port as part of its two-year round- the-world ‘One Ocean Expedition’.

The 107-year-old, 98-metre-long ship, which has sailed 55,000 nautical miles and visited 36 ports across the world, is one of the world’s largest and oldest ships.

The One Ocean Expedition is recognised as part of the United Nations Decade of Ocean Science for Sustainable Development, contributing to Societal Outcome 7 of the Decade – an inspiring and engaging ocean.

Its mission is to raise awareness and exchange knowledge about the ocean’s critical role in global sustainable development. It has also served as an example of the productive collaboration between Jamaica and Norway with a diplomatic partnership of 44 years.

Beate Stirø, the Norwegian ambassador to Jamaica told The Gleaner on Saturday that the visitation of a vessel like this and the opportunity to engage the Jamaican people in this manner exemplifies “the beautiful relationship between Norway and Jamaica, particularly in the efforts in pursuing a sustainable ocean agenda and sustaining the blue economy, making sure that we succeed in combining and harvesting the resources of the ocean with preserving the ocean”, she added.

In a symbolic signing ceremony, Dr Stacy Richards-Kennedy, head of the regional Office of Global Partnerships and Sustainable Futures at The University of the West Indies, and Professor Kerim Nisancioglu of the University of Bergen and the Bjerknes Centre for Climate Research signed a memorandum of understanding (MOU).

The MOU reflects the support provided for Jamaica and Norway’s research collaboration as well as numerous online courses, training workshops, and knowledge exchange between faculty and students on key topics such as climate change, fisheries, pollution, and other important topics concerning the ocean and its impact on the Earth.

Marcus Seidl, captain of the Statsraad Lehmkuhl, said the state of the ocean and its depleting resources was cause for alarm.

Citing the ‘One Ocean Expedition’ as an example of the research programmes that must be in place, Seidl said such programmes are crucial in uncovering what he described as a “great concern of what is happening in the ocean”. He also noted that the number of fish found in the global waters is decreasing as fewer fish are caught each week. This, he said, is “not normal”, and as a result, now is the time to take action.

“We have to do something with the oceans to make [Jamaica] especially, safe from flooding, pollution, and everything that is happening because of high-water and climate change,” said Seidl.

Because the sea is used by everyone and more countries rely on it, Seidl said, “[we want] to make sure that things are not being neglected and that people are aware that if we keep doing this for another 50 years, we are going to be living in a totally different place”, he said of overfishing and other dangerous practices, which are examples of neglect of the food and economic source.

Stirø, who commends the awareness messages that have increased, in her view, over the last few years, said there is still more work to be done.

“The necessity in taking steps to preserve [and] protect the ocean because we really depend on the resources of the ocean not just now, but even more so in the future. We will need more food from the ocean to feed a growing population in the world,” she said sharing sentiments similar to Seidl’s, imploring persons to take the necessary steps to preserve and protect the ocean, working together as resources are harvested in a sustainable way, which would mean tackling the issue of illegal fishing.

She said that she was pleased to know that just like Norway, Jamaica had signed the Copenhagen Declaration and the Blue Justice Initiative, which are aimed at preventing, combating, and eradicating transnational, organised crime in the global fishing industry, as countries will work together to find practical solutions to address this issue.

Senator Kamina Johnson Smith, minister of foreign affairs and foreign trade, who was also in attendance, said that she was pleased to welcome the vessel that is of much historical significance.

She remarked that she remained hopeful that the vessel’s tours and findings would inspire citizens to take ocean-based actions towards sustainable development worldwide.

The vessel, which has an occupancy of 30 staffers and 120 residents, will remain in Port Royal until November 17.

At the end of the voyage across the world, Seidl said the information gathered would be taken to Norway, where an international conference will be held in the city of Bergen to relay the results in efforts to aid other scientists and broaden the awareness of people worldwide.