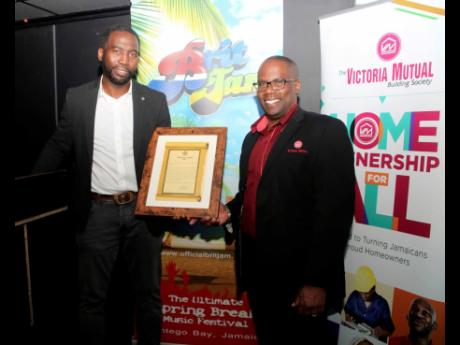 Contributed
Khori Hyde (left) director of BritJam shares the citation with Leighton Smith, chief representative officer for Victoria Mutual Building Society, one of the major sponsors at a reception inside the Ritzy Bar in Brixton, south London.

BritJam, the international spring music festival which links UK, USA and Jamaican music lovers annually, has been honoured with a special citation from the Jamaican High Commission in London as the organisers mark its 10th anniversary of operation.

In making the presentation to BritJam Director Khori Hyde at a ceremony in London recently, High Commissioner Seth George Ramocan said: “I commend Mr Khori Hyde, founder, the executive, members and friends of BritJam UK for their dedication over the years, creating opportunities to promote tourism as well as strengthen cultural connections and empower young people of Jamaican heritage within the United Kingdom to stay connected to their roots and culture.

“The organisation has also played a key role in building and maintaining strong links between Jamaica and the second, third and fourth generations across the United Kingdom.”

The first staging of the festival in 2010 attracted 200 attendees from the UK, 85 from the US, and 35 from other Caribbean islands; but over the years those numbers have increased significantly. A combined total of 15,900 local and international patrons attended the last staging in 2020.

The contribution to the local economy from patrons’ spending was in excess of US$1m for the weeklong festival.

Hyde, in response, said: “The festival continues to attract thousands of millennials, who treasure its unique concept of infusing British and American culture with Jamaican culture, while providing an adventurous, fun-filled party atmosphere with familiar faces in famous tourist locations in Jamaica.”

He said plans for the next festival include pushing the brand as a connector and cultural enabler. There will be a homecoming event on January 2, 2022, dubbed ‘BritJam Live’ at the world-famous Troxy Club in east London.

The team will focus on celebrating Jamaica 60 in the motherland of Africa with a staging of the BritJam festival in Ghana from August 15 to 22. This will be the first of many visits planned for the continent, Hyde said.