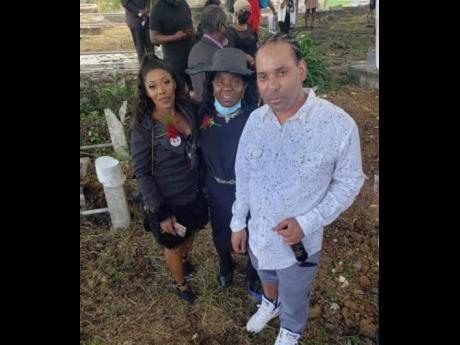 Contributed
Celas Clarke (right) with relatives. Clarke died on November 10 after being hospitalised with COVID-19 while he was an inmate at the Barnett Street Police Station lock-up in Montego Bay, St James. 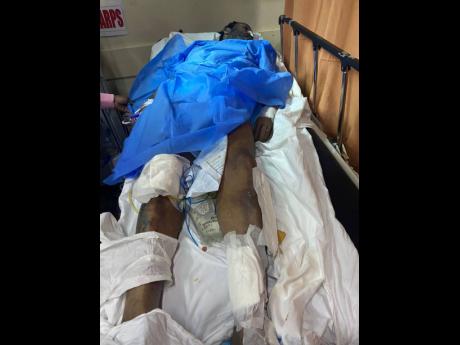 Contributed
Celas Clarke was hospitalised with COVID-19 while he was an inmate at the Barnett Street Police Station lock-up in Montego Bay, St James. He died on November 10.
1
2

Questions abound in Kissy Manning’s mind regarding her brother Celas Clarke’s treatment while he was in custody at the Barnett Street Police Station in Montego Bay, St James, recently. In particular, the injuries she saw on his body more than a week after he died on November 10 shortly after contracting COVID-19.

“When I went up there to the hospital, I saw my brother was cut up, and pure ‘batter-bruise’ on him. Why was he bandaged so much and is jail him coming up from? They said he was in a cell by himself, so how come him cut up so?” Manning asked while recounting the last time she saw her brother.

Clarke, 42, was of a Granville address in St James, and had been in police custody since October 27 on an indecent assault charge. He was scheduled to appear in the St James Parish Court on November 17.

Manning is suspicious of the circumstances concerning Clarke’s time in custody, as she accused the police of treating her rudely whenever she tried to visit her brother.

“When the judge said they would not give my brother bail because he would have to stay there until November 17, I went back up to the station again, and I asked the police about him, and they said ‘You think police have time to waste? Your brother’s not on any bail, he’ll have to wait till the 17 [of November], he won’t come out of no jail till the 17.’ Every time I went up there, they did not handle me good, and it was sickening me,” said Manning.

Attorney-at-law Martyn Thomas, who was representing Clarke, is likewise concerned about the kind of treatment his client was getting in custody, as Clarke was reportedly isolated in the holding area and did not get adequate care after testing positive for COVID-19.

“He [Clarke] tested positive for COVID, and they isolated him, and he just sat there in a cell until Wednesday, November 10, when he collapsed in the cell. They took him to the hospital where he died, and then afterwards I read a story where the police said he had fainting spells,” said Thomas.

The attorney also took issue with how the police reportedly handled efforts to secure bail for Clarke ahead of his scheduled court date.

“We made a habeas corpus application [where attorneys can apply for their clients to be brought before a judge to secure the clients’ release from custody], but Mr Clarke was at that stage exhibiting symptoms of COVID, and the judge said she could not let him out in the public like that. But the police were saying that he was offered station bail and that it was the family who did not come to bail him,” Thomas shared.

“Were the police having him sit in the cell until the family could bail him? There are too many unanswered questions in this matter, because he sat there in the lock-up with COVID, in a poorly ventilated cell, until he passed away.”

Efforts to get a response from Senior Superintendent Vernon Ellis, the commanding officer for the St James Police Division, were unsuccessful.

During a previous SOE in St James in 2018, the Ministry of National Security was criticised by Stacy-Ann Young, the then president of the Cornwall Bar Association, for failing to sign several detention orders that would have sped up tribunal hearings for detainees under that SOE.

Outside of SOEs, the treatment of inmates in police lock-ups came to national focus in 2014 with the case of Mario Deane, who died at hospital three days after he was reportedly beaten on August 3 that year while in custody at the Barnett Street lock-up in Montego Bay for possession of a ganja spliff.

More recently, in August this year, the St Ann police launched a probe into the death of security guard Leroy Martin, who was found unresponsive in his cell at the Brown’s Town lock-up. At the time, Martin was being held for murder, wounding with intent, and illegal possession of a firearm.

The circumstances of Clarke’s death may also bring into question the effectiveness of the St James Health Department’s vaccination drive for the parish’s inmates, which was slated to begin in September. That drive was initially announced following news in August that the St James and Westmoreland Parish Courts were ordered closed by the Court Administration Division following outbreaks of COVID-19 among both facilities’ staff members.

In the meantime, attorney Michael Hemmings, the current president of the Cornwall Bar Association, said that Clarke’s death has prompted his organisation to seek a meeting with the local judiciary in order to discuss how inmates are to be treated in custody while awaiting their court hearings.

“As it relates to the death of that inmate, I wish not to comment on the circumstances just now. But as a result of his death and how long he was in custody before bail was offered to him and before he was brought before the court, myself and other members of the Bar have requested from the senior parish judge for a stakeholder meeting between ourselves, the police and the judges,” said Hemmings.

“Of concern to us is the delay with which persons who are charged are kept in custody before they are taken to court within a reasonable time. That may have been a factor in this case, because had the gentleman been brought before the court in a reasonable time for bail to be considered, he would have been out and seeking the necessary medical attention,” Hemmings added.

As far as Manning is concerned, all she wants is an answer for how her brother ended up in the condition she saw him in prior to his death.

“When they called me and told me that my brother died, I asked what was wrong with my brother, and they could not tell me anything at all. They told me a doctor was to come and read out the head-scan [cranial scan result] to me, and all now I cannot see that doctor,” said Manning.

“When I was taking his picture, they said no picture-taking, but I want to know what could have cut up my brother so, and what bruised his shoulders.”