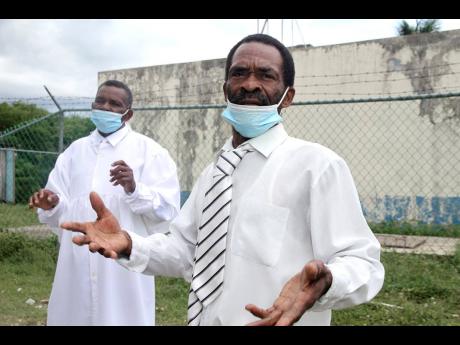 Nathaniel Stewart
Wilbert Edwards (right) and Carlton McDonald of Sangster’s Heights in Clarendon stand beside a tank built by former Member of Parliament George Lyn in the late 1990s. The community members say it is not functioning properly.

The water tank that serves the community of Sangster’s Heights in Clarendon has been described as a ‘wasted monument’ by some residents in the community.

In an interview with The Gleaner, Wilbert Edwards informed that for the longest time, he cannot remember ever getting water from the tank, which, he said, was constructed by former Member of Parliament George Lyn in the ‘90s.

According to him, only some persons in the community benefit from the tank, due to the low water pressure. He said he was always told that all it takes is a return valve to correct the problem.

Carlton McDonald said the water is filled in the tank three times in the week, which is not enough.

“They do not put as much water in it; one hour or one hour and a half, and then they lock it off. They don’t put as much for it to continue serving the community,” he said.

McDonald said that time and again, the matter was reported to the NWC, with workers visiting and “trying to fix it,” but nothing happens.

Jean Lyn, another resident from the community, said they have been told that the problem is with a lock-off valve, which needs to be fixed.

“The community has not been benefiting from the tank, so I contacted the NWC. I don’t know much detail, as I am getting water from other sources,” she said.

Lyn said the tank should be a back-up source whenever there is a drought, adding that she currently does not have any water in her either of her two tanks.

Expressing dissatisfaction, Lyn said she is resigned to the fact as there is nothing they can do about it, as the NWC is already aware of the issue, but has yet to implement a solution.

However, Community Relations Manager for the Eastern Division of the National Water Commission (NWC), Delano Williams, said the valve is not an issue.

He said the area is normally supplied with water via the three wells at the south Chapelton well system. However, there has been a fall-off in supply as low yields forced the shutdown of one of the wells approximately three years ago. The periods of dry spells or droughts in previous years would have also negatively impacted the water supply to the Chapelton and Sangster’s Heights areas.

Williams said that the situation has been further exacerbated in recent weeks by the temporary loss of a second well due to a mechanical issue with the pump. With the loss of a second well, he pointed out that only one well is now viable to serve the community. While the second well will be restored, he informed that immediate action is being taken, hence the NWC is now reviewing the water supply schedule in a bid to alleviate the shortfall being experienced by the residents.

He said that a simulation is under way to decide how best to improve the supply, and that the NWC may have to reduce the number of supply days so as to improve the volume delivered to customers.

He also added that there are long-term solutions being explored to resolve the issue.

“There are two wells we are dealing with now near the Rock River community. We were estimating that one of these new systems will have a greater yield that is sufficient to provide additional water to the Chapelton system and reduce the shortfall that now exists,” he said.

Responding to residents’ claim that when water goes into the tank, it drains out, Williams said that currently, the tank is not in use as the yield is so low that it would have taken about four days to fill it.

He said that bypassing the tank is not ideal ,but based on the length of time and small volume that is available, the delivery times to customers would have been severely affected. He added that the adjustment in schedule will seek to provide temporary relief while the company works to repair the second pump so that more water can be pumped.