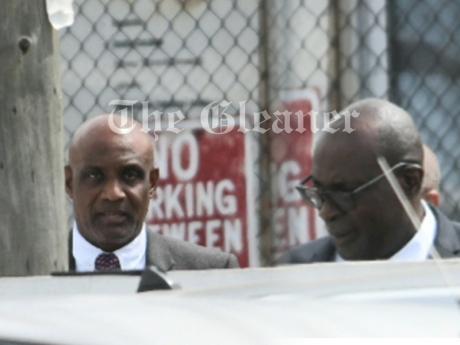 Attorney-at-law Hugh Wildman who is representing Reid and Pinnock argued that the matter was of great public importance and should be decided by Jamaica’s final appellate Court.

The Court of Appeal today refused an application for leave for former Education Minister Ruel Reid and President of the Caribbean Maritime University  Fritz Pinnock to take their fraud case to the United Kingdom-based Privy Council.

The men are seeking to have criminal charges dropped against them.

They are contending that the Financial Investigation Division did not have the authority to arrest and charge them.

Both the Full Court and the Appeal Court ruled that the legal challenge should be made in the Parish Court where the case is to be tried.

The men then sought leave from the Appeal Court to take the issue to the Privy Council.

In June, Attorney-at-law Richard Small who represented the FID, argued that the men should not be granted permission to go to the UK Privy Council.

Small described the application as an abuse of the process.

Attorney-at-law Hugh Wildman who is representing Reid and Pinnock argued that the matter was of great public importance and should be decided by Jamaica's final appellate Court.

In June, the Court of Appeal reserved its decision and handed down its ruling today.

They were arrested in October 2019.

The accused are said to have defrauded the Ministry of Education and the CMU of millions of dollars.

Wildman, in commenting on the Court of Appeal's ruling today said Reid and Pinnock will now have to go to the Privy Council by way of special leave.

Wildman said, already, contact has been made with a lawyer in England  and the necessary documents will soon be filed at the Privy Council

He said Reid and Pinnock will be relying on a ruling by Chief Justice Bryan Sykes who first heard the application.

Wildman said Sykes did not grant the application because he said he did not see any evidence in writing where the two policemen who charged the men were designated by the Commissioner of Police as authorised officers under the FID Act.

According to Wildman, evidence in writing in relation to the designation was produced in the Full Court and the Court of Appeal but they both ruled that the application should be heard by the parish judge.

Senior Parish Judge Chester Crooks had heard an application and ruled that the trial should proceed.

The men challenged Crooks' ruling and the Supreme Court has granted leave for them to go to the Judicial Review Court to quash that ruling.

That matter is to be heard next year.