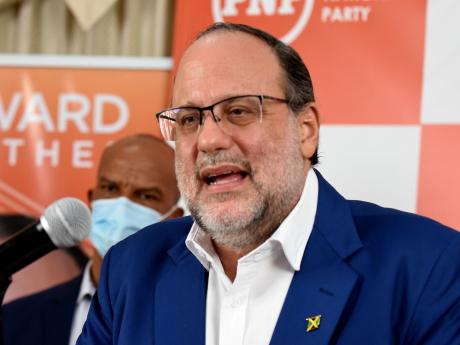 Golding... Jamaicans will see through the politics being played by the Government in relation to the issue.

People's National Party (PNP) president Mark Golding has scoffed at suggestions that the party would pay a heavy political price for voting against the extension of the states of public emergency in seven police divisions.

The Government has slammed the parliamentary opposition for voting against extending the crime-fighting measure.

Speaking at a press conference today at the Office of the Leader of the Opposition in Kingston, Golding said that he does not believe that the PNP would pay a political price for defending the constitutional rights of Jamaicans.

He says Jamaicans will see through the politics being played by the Government in relation to the issue.

According to the PNP president, the declaration of SOEs over a three-year period spanning 2017 to 2020 did not achieve lasting improvements in the country's national security situation.

Golding also renewed calls for the prime minister to host Vale Royal talks to discuss crime, among other things.

“We believe that if we work on this together behind closed doors where we can have open discussions about strategies and tactics Jamaica will benefit from that,” Golding said.