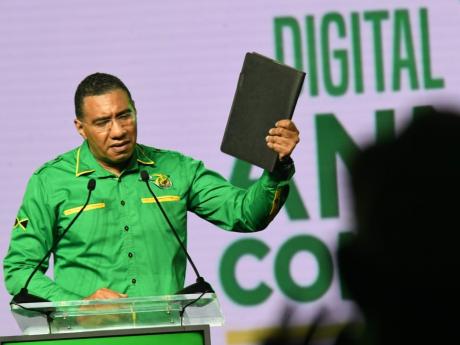 Holness: That's how strongly I feel about it.

WESTERN BUREAU:
If Prime Minister Andrew Holness were to have his way, criminals convicted for illegal possession of a firearm would be liable to face the death penalty.

"That's how strongly I feel about it," Holness said Sunday at the Jamaica Labour Party's Annual Conference at the National Indoor Sports Centre in St Andrew.

Capital punishment remains in the books in Jamaica but may only apply in certain aggravated murder convictions.

However, there has been no executions since 1988.

In 1993, the UK-Based Privy Council ruled that it was inhumane to have a convict waiting for more than five years to be executed.

With gun crimes seeing worrying increases over the past decade, Holness said penalties for firearm offences should be harsh.

He said convicts should only benefit from a lighter sentence when they provide actionable information on their accomplices.

"They should start at the highest level, they shouldn't get automatic plea bargaining. No, those who perpetrate this should face the most severe consequence," the JLP leader insisted.

Meanwhile, Holness said the government is in talks with a French security firm to help Jamaica in its response to crime through the use of technology.

The Prime Minister did not provide details on the engagement.