#JLPConference | Listen to the people, JLP tells PNP over SOE 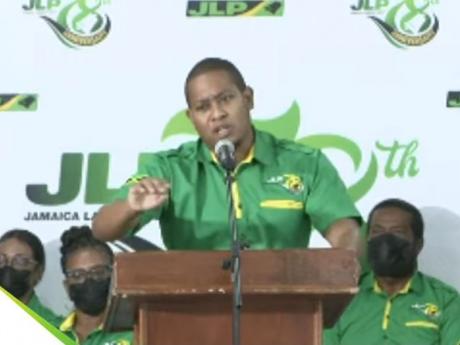 Green: Listen to the voice of the communities in the west.

WESTERN BUREAU:
Chairman of the Jamaica Labour Party (JLP's) Area Council Four Floyd Green has led his colleagues telling the Opposition People's National Party (PNP) to listen to the security forces and the wider voices of Jamaicans to support states of emergency (SOE).

Since 2018, the government has imposed several rounds of states of emergency as one of its crime-fighting strategy.

But last week, Opposition Senators blocked an extension of the latest imposition of the measure.

According to Green, under the SOE's Jamaica has seen a significant reduction in murders, especially in western Jamaica.

"In the last two weeks, murders declined across the island by 38 per cent. We saw murders move from 300 murders in St James to 100 murders under the SOE,” Green said to bell-ringing Labourites in Westmoreland at the James Hunter Event Centre, in Negril.

The JLP's 78th annual conference being held at the National Indoor Sports Centre is being streamed to numerous satellite sites across the Jamaica.

“Listen to the Commissioner of Police, listen to the chief of defence staff and let us put back in place the state of public emergency,” Green pleaded.

The National Security Minister Dr Horace Chang has said it is unlikely that another SOE would be imposed in the short term.

Earlier, other JLP members of the Jamaica Labour Party accused the opposition of undermining the country’s national security.

According to deputy chairman Aundre Franklin, the opposition was being tone deaf to the recommendation made by the security forces.

Franklin's views were echoed by first-time member of parliament for the constituency of Westmoreland Western, Morland Wilson.

"I want to put on record that we are 100 percent behind the Prime Minister on the State of Public Emergency and despite what is happening with the conversation and the debate, we must put our people first and not our egos and our political wishes,” said Wilson.

He said the data is clear that the SOEs have reduced crime across the police divisions.

“I ask the opposition leader to remember your conscience … . We stand here and look and watch them play politics with the lives of Jamaican people and we, as Labourites, must stand up against it," he said.