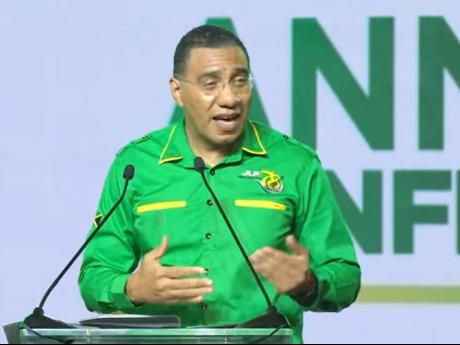 Holness: It is a miserable time.

Local government elections are constitutionally due by February 27, 2022 after they were postponed in 2020.

Addressing Jamaica Labour Party supporters at the 78th anniversary conference, Holness said with a new COVID variant and all the pressures of the virus, the time is not appropriate for politics and elections.

"It is a miserable time," he said.

Holness said as a result of the impact of the pandemic, Jamaicans are faced with high costs for goods and services.

But Holness said he is confident that the JLP will win the next local government election.

An election this year would coincide with Holness' 10th year as JLP leader.

Earlier, JLP Chairman Robert Montague said that the party was prepared and ready for the local government election.

He also took at jab at the People's National Party said it was not brave enough to face the people at the polls.

The JLP's 78th annual conference was held at the National Indoor Sports Centre in Kingston and streamed to 10 satellite locations across the island.