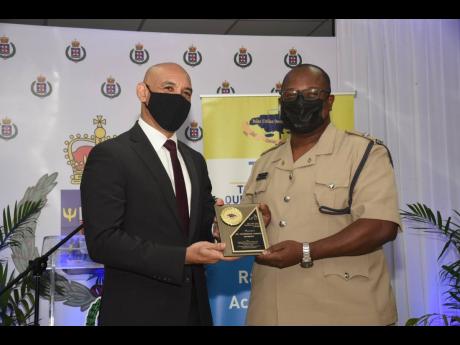 Commissioner of Police Major General Antony Anderson’s approach to leadership is a transformative one. Thus, he goes out of office to see for himself what is happening in the administration of the police divisions. And he has seen and heard things that he is not happy with.

For instance, he said these are some basic things, such as records-keeping resources that are critical to accountability and successful policing that are missing, or inadequate. He said it is “not acceptable” for officers to extend themselves, especially financially, to put some of the basic things in place to get their job done.

Anderson was speaking at the virtual awards ceremony for the Area 4 Transforming Our Police Service (TOPS) competition on Thursday, via a live stream on the Jamaica Constabulary Force’s (JCF) social media platforms. He also bemoaned the “overwhelming” level of violence in the country, and in essence, the amount of time, resources and emphasis spent on murder which, he said, is “the standard that we have accepted as a country, as a standard for policing”. Everything else has become secondary, when, in fact, those other things are the bedrock of our survival, he expressed. Yet, it seems that things are not going to remain the same.

One of the changes he said will be the building out of the back end of the forces, to get more officers to the front end to do the things that they need to do. And, he revealed, “We are going through a series of processes now, particularly in Area 4, where we are getting two of our stations 90001 compliant in certain areas, and also a police emergency control centre. The actual documentation processes and procedures to get this done have been extensive,” he said.

“It has brought home to us, not only what needs to happen at the stations, but with the linkages as you work that backwards up the chain, while everything in that chain needs to work to deliver at the front end. By next year we should have these areas compliant.”

Launched in 2019, TOPS, an initiative of the Police Civilian Oversight Authority (PCOA), “is aimed at fostering greater conformance with prescribed JCF policies as well as raising morale among police personnel”. The competition also “facilitates a broader objective of the PCOA to enhance the culture of policing in the community and, by extension, the business community through professionalism and police partnerships built on openness, trust and accountability”.

This year, it was held in Area 4, which comprises five divisions (St Andrew South, St Andrew Central, Kingston Eastern, Kingston Central and Kingston Western), which collectively have 31 stations. The inspections for the current competition were conducted between September 27 and October 19, during which records management, station administration, station facility and community/customer service were evaluated. The winners were announced on Thursday via live-streaming on the JCF’s social media platforms.

Also addressing the gathering was Jacqueline Hinkson, chairman of the PCOA, who encouraged the stakeholders to see the connection and importance of back-office processes to the overall success and transformation of the JCF.

“If you get these processes right, I guarantee you, you will see a difference in your performance at the divisions and, generally, in all your activities,” she said.

The PCOA was established ‘to aid the transformation of the Jamaica Constabulary Force and its auxiliaries into a highly motivated professional, disciplined and service-oriented police service that works in close partnership with the community through modern democratic policing policies, performing with courage, diligence, honesty, impartiality and accountability’.