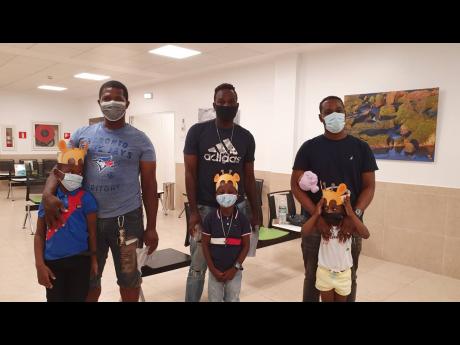 The majority turnout of men ran counter to the tradition of mostly mothers and grandmothers escorting students for healthcare checks, and offered a glimpse of the evolving roles many fathers are adopting beyond financial providers.

Gervon Thomas, who accompanied five-year-old Kadayja to get her tests done, spoke of how critical it was for him to be there with his daughter.

“Although I have a job to attend to, my daughter comes first. So I actually put out the effort to get her stuff together to get her back to school. She’s very important to me,” he told The Gleaner.

Moreover, the funds he would have to find to finance the medical, had Hospiten not offered the service free of cost could be diverted to the purchase of books.

The father of three, who resides in Flankers, said Kadayja attends the Whitehouse Early Childhood Institute.

Another father who took time off from work to get his child’s medical, Talvert Smith, explained that his children’s education came first, and they were the future of the country, which meant attention needed to be paid to the early years of upbringing.

“I should be at work now, but I make the time to be here,” he said.

Horatio Brown, who grew up without a father and pledged that his children would not have the same experience, said that a lot of modern-day fathers were changing long-held stereotypes.

Brown, who does a little fishing to sustain his family, was extremely grateful to the organisers of the camp.

Hospiten’s Commercial Director Chevaughne Miller, the brainchild behind the initiative, said that her organisation believed that, with most children being out of physical school for more than 19 months, it was important to subsidise the cost of medicals.

Miller did not offer a dollar figure on the initiative, but a visit to the paediatrician is estimated to cost $6,000 per child.

Students underwent urinalysis and a complete physical. Each child was also served a healthy snack pack.