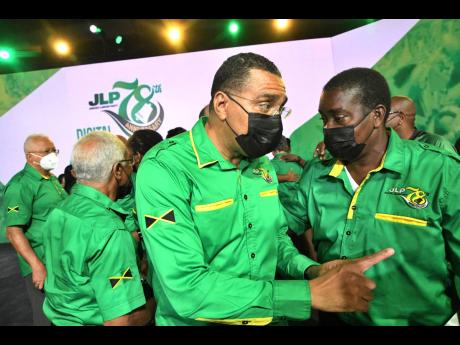 Prime Minister Andrew Holness has said there are no immediate plans for local government elections.

Local government elections are constitutionally due by February 27, 2022, after they were postponed in 2020.

Addressing Jamaica Labour Party (JLP) supporters at the 78th annual conference, Holness said that the emergence of the new COVID-19 variant, omicron, and displacement caused by the coronavirus put paid to any thought of imminent elections.

“It is a miserable time,” he said.

Holness also said that the pandemic has fuelled a spike in the prices of goods and services.

However, Holness, who is also leader of the JLP, hinted that a win at the next local government elections was almost a foregone conclusion.

Holness has been JLP leader for 10 years.

Earlier, JLP Chairman Robert Montague said that the party was prepared and ready for the municipal polls, which were last held exactly five years ago.

He also took a jab at the Opposition People’s National Party, saying that its appeal to the Government for a memorandum of understanding pledging there would be no elections this year indicated it was not ready to face voters.

“Something not right, something wrong,” Montague quipped.

The JLP’s 78th annual conference was held at the National Indoor Sports Centre in Kingston and streamed to nine other satellite locations across the island.