Clarke says most sectors experience growth despite the pandemic 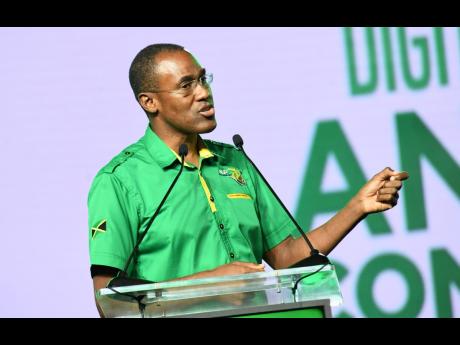 DESPITE THE onset of the pandemic in 2020, the Jamaica Labour Party (JLP) Government has seen high levels of job recovery and growth, said Finance Minister Dr Nigel Clarke.

Clarke, who made the announcement at the JLP’s 78th annual conference on Sunday, stated that the economy grew by 14 per cent in the first quarter of 2021. This is expected to grow by another six per cent in the second quarter, from July to September.

All sectors in Jamaica, said Clarke, are recovering from the COVID-19 pandemic and its impact on business operations, with the exception of one that was not named.

Tourism, manufacturing, wholesale and retail services, among others, were identified as experiencing rapid recovery rates.

“When we went to Parliament earlier this year, and we said we were banking on a recovery of five per cent this year, they laughed at us. They never believed. Lo and behold, we have surpassed even what we have planned and budgeted,” declared Clarke.

He went on to say that the International Monetary Fund has predicted an economic recovery of more than eight and a half per cent for this fiscal year.

Clarke, unable to provide a detailed breakdown of all sectors because of time constraints, highlighted the construction and infrastructure development sector, which he says “exemplifies what has been happening all around”.

Despite the pandemic’s effects, Clarke applauds the efforts of the JLP, which had fiscal resources of over $73 billion on which the Government could rely, despite the fact that revenues collapsed and expenses skyrocketed as a result of the pandemic.

“Without those $73 billion, there is no way we would be experiencing the recovery that we are experiencing now,” as he noted that, between 2016 and 2019, the Government of Jamaica has built up over US$1 billion in foreign exchange savings that has saved the country during the crisis.

Clarke also stated that legislation will be put in place to attract “mega investment projects” worth more than US$1 million, as the ministry is currently working on these projects.

“We are going to ensure that we rebuild our capital investment,” said Clarke.

Over 50,000 Jamaicans have received cash resources from the Government for 12 months between 2020 and 2021, he reported. Currently, the ministry is working to implement a programme that will enable 350,000 Jamaicans, some of whom earn less than $15,000 per month, to receive government grants, said Clarke.

“On your behalf, we are working to rebuild our economy, to recover from the pandemic and to take Jamaica forward,” he said, speaking of families and their future generations.