‘People are ready for the PNP’ 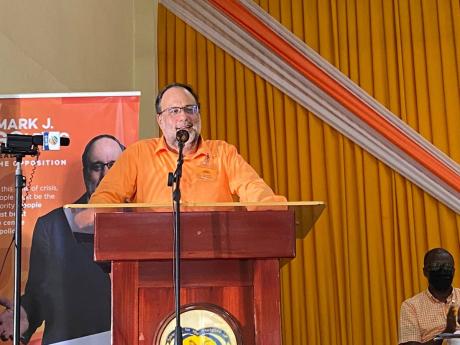 Having spent the “last few weeks on the road”, People’s National Party (PNP) President Mark Golding is upbeat based on the response he has been getting and has underscored the importance of the upcoming local government elections to his party.

Golding said the current government, formed by the Andrew Holness-led Jamaica Labour Party, is spiralling out of control with a new scandal every week.

The Opposition leader said he wants the PNP to do well in the local government elections, expected by February 2022, so as to send a message that the party is ready to govern once more.

“We want to do well in the local government elections because we want to serve the people in the local communities in the municipal councils and in the city municipality of Portmore as well as possible, to give them what they need in terms of local representation. So, Comrades, this is an important election for us. If and when we do well it will give us the momentum going forward that will show Jamaica that the PNP is back powerful and strong and ready to resume government in this country.”

At the meeting, Golding indicated that the rebuilding of the party continues as he announced that Natalie Neita-Garvey has been drafted into the officer corps with responsibility for team building and conflict management in constituencies, and assist in identifying and recommending executive assignees to coordinate political work in constituencies where there is no active leadership.

“I believe you will serve a very important role to help our party move forward,” Golding told her as he invited her on stage to take a seat.

Golding also announced that Lisa Hanna and Mikael Phillips will also join the party’s executive committee, with Phillips being given the responsibility to co-chair the local government campaign committee.