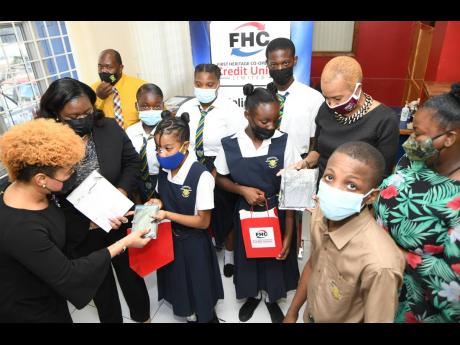 Education Minister Fayval Williams has reasserted her support for blended classroom learning and has lobbied that administrators maintain that option in the new year, even as more schools reopen for face-to-face classes.

Addressing a ceremony for the handover of 10 tablets donated by First Heritage Co-operative Credit Union Limited in Kingston on Tuesday, Williams reaffirmed that technology-based education would remain a permanent fixture in schools.

The technologies used in the 20 months since schools were closed because of the coronavirus pandemic are drivers of modern societies, Williams told The Gleaner on Tuesday.

“It will remain with us,” she remarked.

“Despite us trying to emerge from the pandemic, we still have to have technology as part of the enabling environment for education.”

Citing the November launch of a coding campaign in schools, Williams said it was important that every child have a computer.

The coding programme will target students from grades one to 13 and 15,000 teachers in public schools across Jamaica. Approximately 400,000 students are expected to benefit.

“We want our people to become technology savvy, not just as users of the technology but as producers and so you have to give them the tools, including the device, connectivity, the resources, the e-resources for them to be able to develop into those digital citizens that we would like to see them become,” said Williams.

With a goal of vaccinating at least 65 per cent of the secondary-level student population, Williams said several schools are inching closer to that goal as they continue to hold inoculation drives.

Nine schools have met, or are on the verge of meeting, that benchmark, the education minister told lawmakers in the House of Representatives on Tuesday.

Williams said that the ministry was continuing its efforts to locate as many students who have been out of touch with administrators and teachers since the transition to virtual classes in March 2020.

According to Williams, the ‘yard to yard’ initiative, which began in mid-November, will gain traction as more children are transferred into face-to-face environments.

“Then you would know clearly that this student didn’t show up, so we know we need to go to their home and talk to their parents and see what’s going on,” she said.