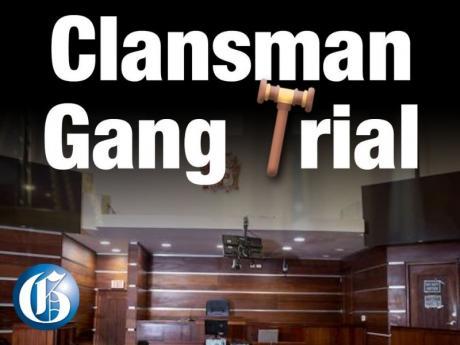 A detective sergeant also told the Home Circuit Court that the star witness was never told that he would never be charged or that charges are likely.

The chief investigator in the Clansman-One Don Gang case this morning disclosed that the prosecution's second main witness is not likely to face any anti-gang charges but may be charged with other crimes.

The second main witness is an ex-member of the One Don Gang, a break-away faction of the Clansman Gang.

Meanwhile, the detective sergeant also told the Home Circuit Court that the star witness was never told that he would never be charged or that charges are likely.

The pronouncements from the detective came after he was further grilled by Chief Justice Bryan Sykes about why the ex-gangster was never charged.

Yesterday, the sergeant was similarly questioned at length by defense attorney Denise Hinson about the witness not being charged.

At that time, the detective told the court that the police had investigated and the witness was not a suspect in any of the incidents that he had spoken about or in an incident in St Catherine North.

But when the matter resumed this morning,  the judge told the sergeant that he wanted to understand the process by which the witness was not charged.

"I am trying to find out, what was the thinking of the police?" the judge asked, given that the witness had confessed that he was a member of the gang, and was a party to murder, extortion and arson.

Justice Sykes further questioned whether this was now a policy directive or a pattern by the police not to charge main witnesses regardless of the level of atrocities they have committed.

According to the judge, in the three gang trials where he had presided, none of the main witnesses was charged although the police had made a similar argument that they might be charged.

The investigator in response told the judge that while he was not aware of there being any policy directive or pattern, based on the anti-gang legislation a gang member is the best way to bring down an criminal organisation and so he treated the ex-gangster as a witness from the day he approached the police.

The detective said he felt it was the best route to take although he agreed that he could have charged the witness and have him enter into a plea deal arrangement.

But at the same time, he conceded that he was fearful that the witness would not cooperate if he was charged.

The witness has, however, testified that when he went into the police with information on the gang he had made up his mind to serve time in prison if he was charged and convicted.

Reputed leader Andre 'Blackman' Bryan and 32 other alleged gang members of the One-Don Gang are being tried on a 25-count indictment under the Criminal Justice (Suppression of Criminal Organisations) Act and the Firearms Act.