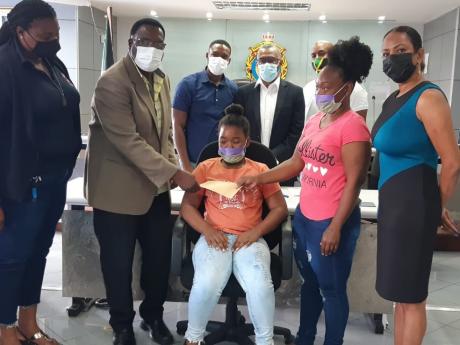 Calyssa Walker (seated) and her mother Kelly-Ann Reece (second right) receive a donation of $250,000 from Montego Bay Mayor Leeroy Williams (second left) at a brief ceremony at the St James Municipal Corporation on Friday, December 3, 2021. The donation was made towards medical expenses for Calyssa, who was shot and injured by gunmen during a high-speed chase in Montego Bay on October 6. Also pictured from left are Deon Stern Anglin, acting principal of Corinaldi Primary School; Richard Vernon, Deputy Mayor of Montego Bay; Charles Sinclair, the councillor for the Montego Bay North East division; Dwight Crawford, the councillor for the Spring Garden division; and Rena Forbes, the councillor-caretaker for the Mount Salem division. - Christopher Thomas photo.

The St James Municipal Corporation today donated $250,000 towards medical expenses for 10-year-old Calyssa Walker, who was shot and injured by gunmen during a high-speed car chase in Montego Bay on October 6.

Montego Bay Mayor Leeroy Williams presented the financial contribution to young Calyssa and her mother, Kelly-Ann Reece, at a brief ceremony at the municipal corporation building this morning.

Calyssa was one of five bystanders who were injured in the October 6 shootout that resulted in the deaths of three men following a car chase into Montego Bay's downtown district.

According to police reports, the shooting was gang-related.

During the incident, which unfolded at 2:00 p.m., Calyssa was shot in the head and suffered hearing loss in her left ear along with loss of balance and constant pain.

She needs a cochlear implant surgery, which costs US$50,000 or J$7.8 million, to restore her hearing.

How you can help Calyssa Walker